In the summer of 1971 I was sixteen years old and had just completed my ‘O’ level public examinations. So too had my friends Paul Gateshill, Callan Slipper and David Cledwyn. We decided to celebrate by going on a camping trip to Exmoor. We looked at the map and booked coach tickets from home in Hampshire to somewhere in Exmoor.  Someone on the coach recommended we get off at Wheddon Cross. The  driver duly deposited us there among a few houses, a pub and a shop and post-office. ‘Is there anywhere around here we can camp?’ we asked at the pub.  They sent us off to a farm about a mile away which provided a camping field. It was full of tents and caravans and people.  ‘Have you got anywhere else we could camp?’ we asked the farmer and his wife.

What wonderful and generous folk they were. They allowed us to camp beside a stream at the bottom of a steeply sloping field quite hidden from the world. The only sounds were of the water running, the wind through the leaves of the trees, and our guitars and voices.

Until the farmer turned his sheep out into our field.

These sheep did not ‘baa’, they positively vomited a dreadful ‘murghhh!‘ They disturbed our sleep and interrupted our conversations and our songs, but they were also very funny in their dreadful commentary.

We occasionally quote these sheep to each other to this day.

But I am running ahead of myself. On arrival in the field beside the stream, before we had even put up our tents, Paul and Callan stripped off entirely in order to be at one with nature.  I took my camera from my backpack. They ran to the stream. Callan hid behind a bush; Paul sat himself down in the icy flow. I clicked.  I have the photograph to prove it. Correctly exposed too.  Unfortunately I am not allowed to share it with you.

The farm  was called Blagdon Farm and the elderly couple that lived there were Mr and Mrs Melhuish. Mrs Melhuish had a wooden leg so naturally we called her – among ourselves – Mrs Pegleg. She baked us a huge fruit cake and supplied us with jugfulls of cream-laden milk from their cows.

Mostly we camp-fire-cooked, ate, played our guitars, wrote poetry and songs, and philosophised in our no doubt adolescent way.  But one day we decided to go for a walk. The farm and our field lay below the great dome of Dunkery Hill. The top of Dunkery Hill is the highest point in Exmoor and is known as Dunkery Beacon. Our stream was one of Dunkery’s offspring.  We set off up the valley, sometimes on pathways, often on animal tracks through the thick undergrowth of the woods. When the stream split we chose the right-hand tributary because it flowed more directly down from the Hill. It was some while before we emerged from the trees and out on to open purple heather and bright green bracken-clad slopes. We headed for the highest point on the great curved horizon of the Hill by well worn tracks. We crossed a road. There were more tracks. There was a red grouse – red, white and russet .  It whirred off over the heath. Just one according to my diary. There must have been more of course.  Not necessarily that many more though. By 2005, the red grouse was extinct in Exmoor.

We continued our only ever gentle climb until we reached the top, Dunkery Beacon. A cairn; some vague prehistoric barrows, and a splendid view across Exmoor and beyond to the Bristol Channel and to Wales, from 1,705 feet. According to my diary, we ate our picnic lunch sitting on a rock.

I don’t remember whether we saw any Exmoor ponies or not. I would have been disappointed if we didn’t, but it would have been made up for by what we did see as we returned to camp. Back in the woods, following a narrow deer-track, we very nearly stepped on a fawn. It lay quite still, its head turned tight against its flanks, rows of white dots along its back.

We knew not to touch it and we only stayed to look briefly.

The question is, what fawn was it – roe, fallow or Exmoor red ?

In the Summer of 1972 we had nothing in particular to celebrate, but we had so enjoyed ‘Exmoor ’71’ – as it has come to be known (after a song I wrote) – that we decided to go camping there again. The Melhuishes were kind enough to allow us to camp down by the stream again – in splendid isolation from the human world and at one with nature. This gave rise to ‘Exmoor ’72’, a song that Paul wrote. It is available to be listened to on Pauls’ fine CD ‘Years in the making’ – 2002. ( See : www.bundellbros.co.uk/Genealogy.htm)

Ivor came with us this time, and Callan’s brother Jonathan. So did our friend Neil. We had invited him to come, he had vaguely said he might, but we didn’t really think he would.  We had settled in, put up our tents and begun to cook our meal, when someone politely said ‘ Huh-humm’.  It was Neil !

How did he get here ? How had he found us ? It remains a mystery to this day. I shall have to ask him – though even he probably doesn’t know.

The great adventure of ‘Exmoor ’72’ was our walk to Minehead, some seven miles to the north at the seaside. We set off early, climbing the easternmost skirts of Dunkery Hill by footpath and track. Suddenly we looked down upon a magic land, a rolling patchwork of fields and woods and hillocks, of farmsteads, a village or two, still in morning light – a glimpse of Middle Earth. A vision.  Here is how I have imagined it : 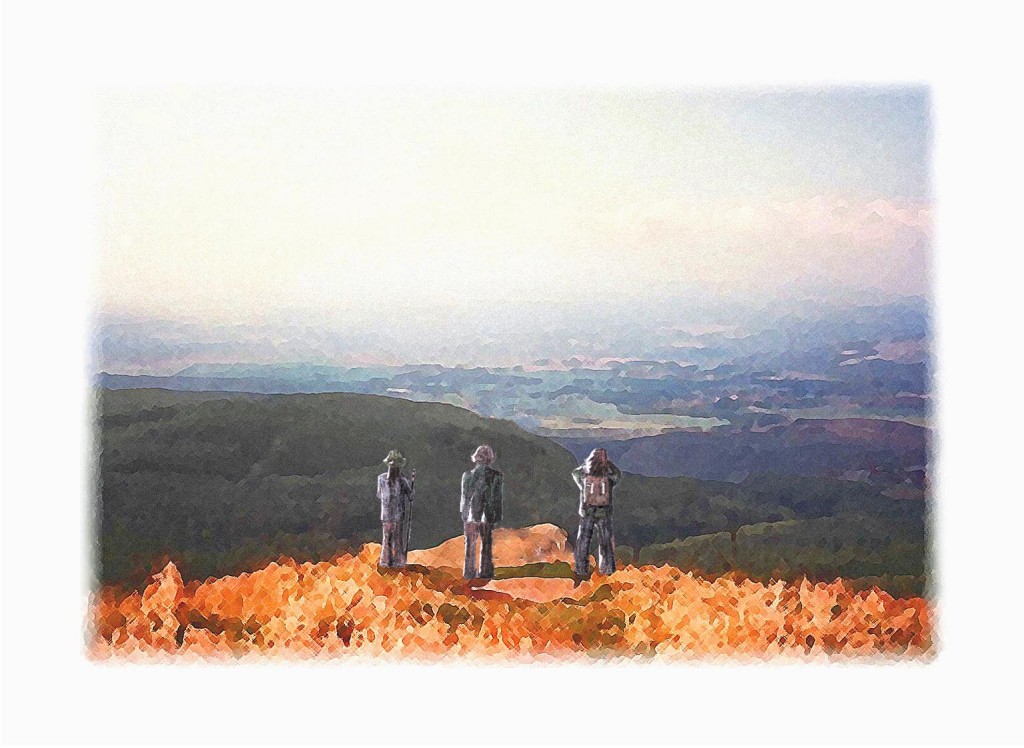 Here is how it was : 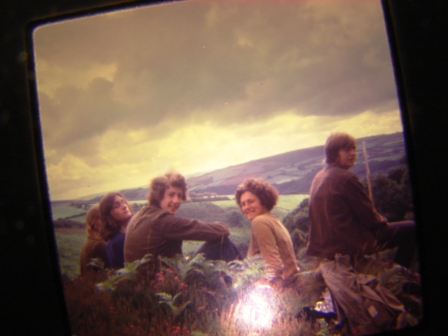 Minehead beach was wide and the sea far out from the promenade. We placed our clothes on the sand and went for a swim. After the swim we started getting dressed again. But the tide was coming in faster than we could get our clothes on. We had to move ourselves up the beach twice at least before we were decent again. We caught a bus back to Wheddon Cross and walked wearily the mile back to camp.

We also strolled up to Dunkerry Beacon one day, as we had the year before, but this time disturbing a couple of red deer on our way.

And now I can no longer put off the matter of the wild trout.

Ivor decided he’d try cooking a cake in a billy-can on the camp-fire. Paul, Callan and I decided we’d go for a little walk in the stream. The month was August. As we moved upstream we soon found that, for lack of rain, the stream had shrunk to a series of more or less isolated pools. We also discovered that in each pool there were trout. I could not resist the possibility of catching one – or two. They dashed under the bank as we appeared. I dipped my hand into the water and under the bank too, bravely exploring unseen crevices and holes until I could feel the fish, slippery and trapped. I grasped it where its body was widest so that it could not slip either forward or back and extracted it from its desperate refuge. On to the bank, and a bash on the head. Done. And so too another; and a third . . . until I had taken every fish I could find. Then on to the next pool and the same again. These were mature fish, perhaps eight to twelve inches long – I let any smaller ones go. In one or two hours we – I – must have decimated the trout population of this stretch of the stream.

We carried the fish in a sock, which stretched until it was half our height with the great mass of fish.

On the other hand, thinking about it, there couldn’t have been that many fish because we ate the lot in one meal that evening – and still had room for Ivor’s cake (and custard) for afters.

My conscience is eased a little.

Except that we were teenagers. We could probably have managed a whale.