Some settlements don’t stay where they were first put. Old Sarum proved both too windy and politically inconvenient, so it was dismantled, and New Sarum – Salisbury – was built a couple of miles away – using Old Sarum’s stones. The new city has yet to prove it can stay the course. It is only 800 years old. The previous site was used for perhaps 4,000 years before being abandoned.

Old Sarum is an iron age hill fort topped by the remains of a Norman castle. The fort was constructed in about 400 BC on the top of a modest natural hill, which nonetheless dominates the landscape around, and which shows signs of having been occupied from around 3000 BC. Two enormous earth banks circle the hill top, with a steep-sided ditch between them – the depth of which had me dizzy. 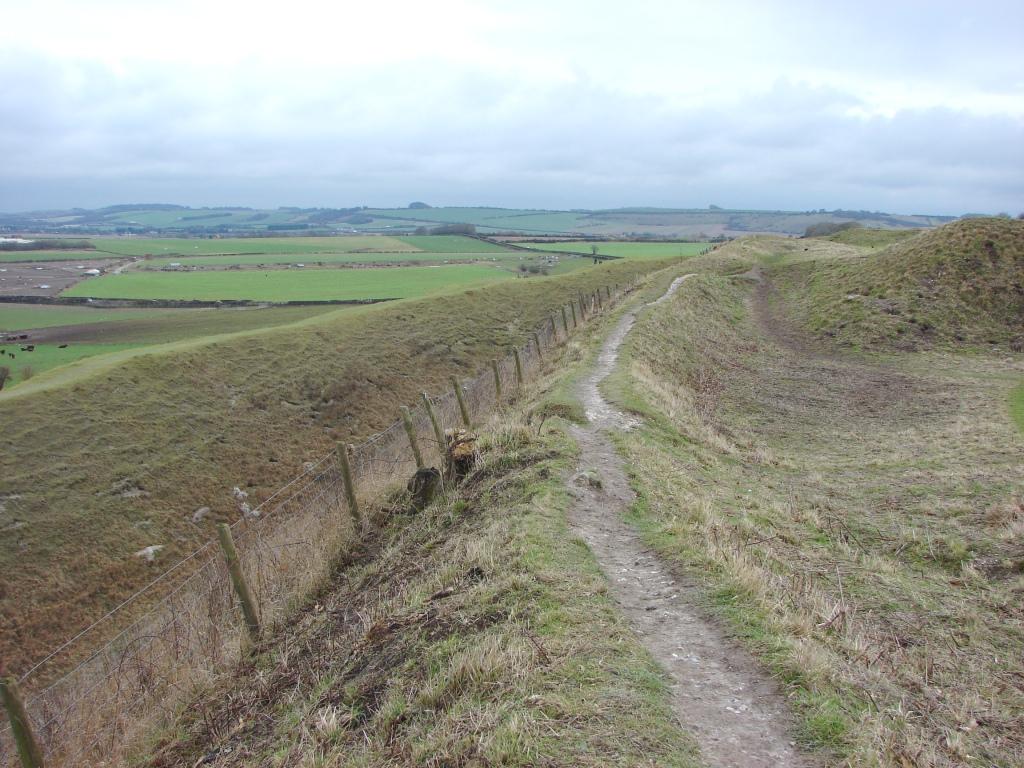 The volume of earth that must have been moved – by hand – is staggering. And the climbing up and down involved. They must have had a good reason for building the fort – and they were not the only ones. There are hundreds of such iron age hill forts all around the country – some of them considerably bigger than Old Sarum. The obvious reason for a fort is defensive, but it’s not clear that this was the only or even the main reason for building them. They may have been intended as much as symbols of local power and as ritual centres.

Old Sarum, however, certainly served as a fortress at various times in its history. In 552 the Saxon King Cynric captured the hill from the celtic Britons. In the 9th Century King Alfred restored its fortifications against raiding Vikings, and in 960 King Edgar held a gathering there to make plans against the Danes, who had by then taken over much of east and northern England and threatened to have a go at Wessex as well.  In 1003 it was sacked and burnt by Sweyn Forkbeard, King of Norway and Denmark. Since the Ancient Monuments Protection Act of 1882 it has been taken over repeatedly, but peacefully, most recently in 1983 by English Heritage.

The banks at Old Sarum enclose a more or less level area – except for the castle mound – of about 6½ hectares (16 acres). There is a single entrance through the earth banks to the east. This was the first hill fort I have arrived at where I found myself driving through the fort entrance and discovering the car park inside its earthworks. It is usually necessary to climb up to these forts on foot. But then most hill forts don’t also sport a Norman castle – or rather a motte and bailey – that is, a mound and a castle courtyard and wall. This would have required a road of some mettle to get to it – and indeed to build it – so the road I drove up is probably mostly Norman – although the car park probably isn’t.

The Normans – who were actually Vikings who had been in France for a couple of centuries – must have been organised, energetic and very bossy. They had hardly invaded – in 1066 you may recall – before they had built castles all over England. The Old Sarum castle was completed by 1070 – only four years after their arrival. They must have immediately enjoined the local population to assist – in numbers. What were the rates of pay – or was it slave labour ? If large numbers of locals were pressed in to construction work, who carried on farming to feed them ? Shortly after 1075 – precise date unknown – they started building a cathedral beside the castle, though it was not completed until 1092 – the slackers. By the middle of the 12th Century a royal palace had been added to Old Sarum and it seems to have been a flourishing town surrounded by fruitful fields. 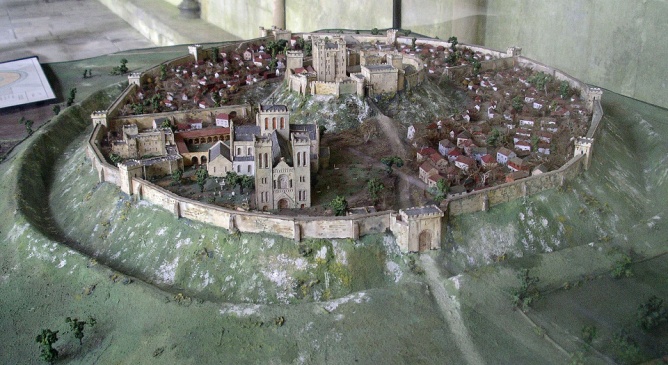 Times change. In 1218 the Bishop and his clerics asked the Pope if they could move out of Old Sarum and build another cathedral down by the river.  On the one hand they complained that the wind was sometimes so strong that services could not be heard and that the roof kept being damaged.  I sympathise. The wind blew chilly and hard for the duration of my visit. (It must also have blown ferociously not long before as a gang of chaps in yellow jackets and hard hats were busy removing fallen yew trees, root plates and all, from the banks of the fort).  At the same time, the Bishop and co had a long list of complaints about the behaviour of the civil and military authorities who they clearly felt were cramping their style.

Which of the these reasons weighed most heavily with the papal delegate who came to investigate the issue I couldn’t say, but the Pope agreed to the relocation. The foundation stone for the new cathedral was laid on the 28th of April, 1220 and although inhabitants lingered on in Old Sarum for a while, in 1332 the castle was demolished, at the command of Edward II.

Now, there are only ruins :

There is even less of the old cathedral remaining than of the castle : 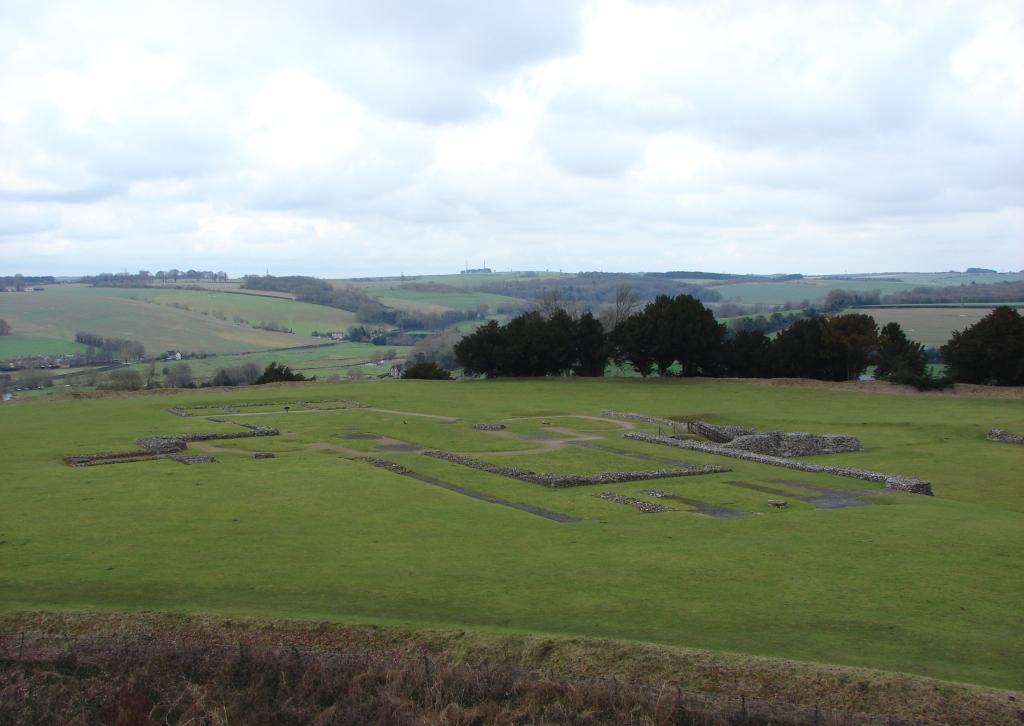 This means that the Norman occupation of Old Sarum was but a blip in its existence.  Meanwhile, the ancient earthworks remain more or less as constructed :

Old Sarum today – http://www.english-heritage.org.uk/visit/places/old-sarum/ – showing the fort, the remains of the castle and cathedral – and the car park.

Mind you, the vandals didn’t quite take it all. A few dressed stones remain in the flint and cement walls : 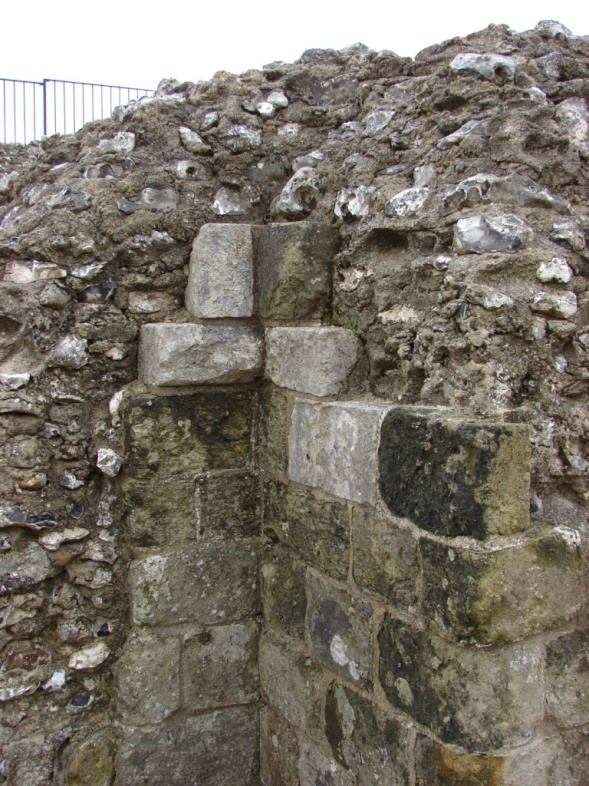 The cement, despite its age, is as hard as the stone, if not quite as hard as the embedded flints. It must have taken as much effort – and labour – to dismantle the place as it had to build it.

The dismantling of the castle complex and of the cathedral cannot be condoned of course – except that it was the means to the creation of the new cathedral by the river. Salisbury Cathedral is one of the finest in the country, with its spire – the tallest in England at 404 feet – rocketing heavenward, its delicacy of detail in both stone and glass and its general airiness, with light pouring in to the nave from double rows, low and high, of mostly clear-glazed windows.

It is clearly visible from the ramparts of Old Sarum : 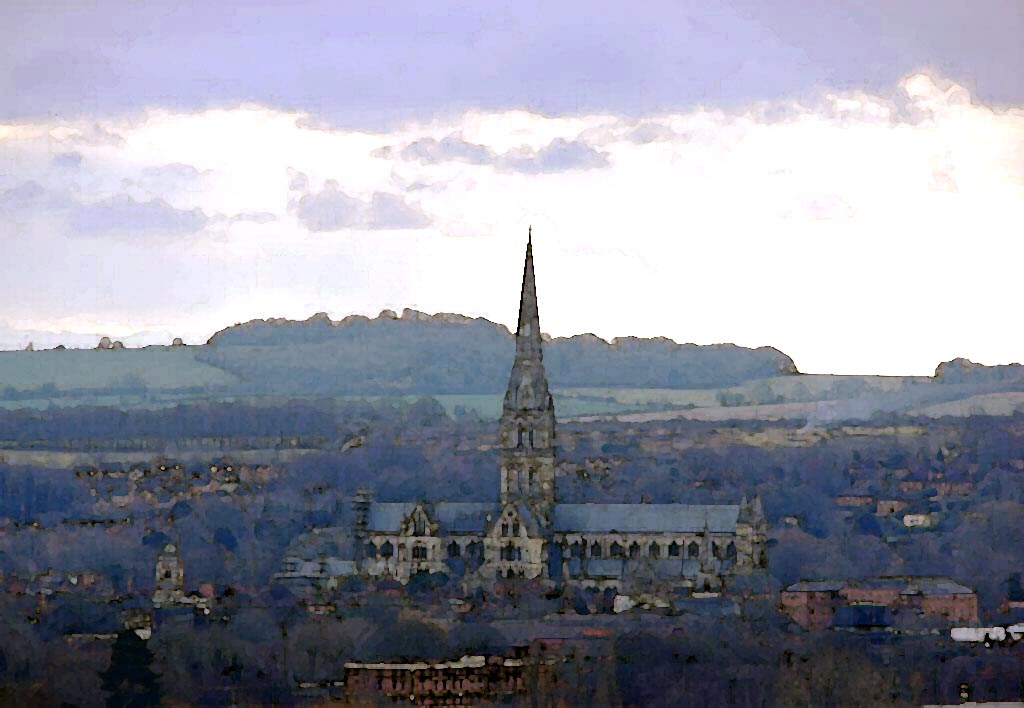 The new cathedral was mostly complete by 1258 although the tower and spire were not finished until 1320.  This means that those who began the project never lived to see its final completion, including the carpenters, masons, mixers of cement and general labourers involved. Still, it did provide them and their descendants with a living for a hundred years.

But what did the workers do once the Cathedral was finished ?