The Mappa Mundi at Hereford is a medieval ‘map of the world’ created somewhere about the year 1300. I had quite forgotten about it until I stopped off to see the Cathedral and was accosted by multitudinous signs and banners advertising its presence. Mind you, I was in good company. The map seems to have been more or less forgotten by everybody – until 1988. In that year the Cathedral authorities, faced with a hole in their finances, decided they’d put the map up for sale.

There was outrage !  And lots of dosh.  Substantial contributions from the National Heritage Fund, from Sir Paul Getty and from the public not only kept the map in the Cathedral but also provided for a new library building in which to display it. It is now a well known national treasure of international importance, registered with UNESCO.

Before I had a look at the map, I had a look at the Cathedral. One of its claims to fame must be that it took an unusually long time to build. Although there had been a cathedral there before, it was a ruin by the time the Normans arrived, so the present cathedral’s beginning can be counted to be in 1079 when a new Bishop started to reconstruct what remained. However, it was only about five Bishops later – around 1140, plus or minus – that this new building was completed. Only, not long after, another bishop arrived and it was all changed. Further changes continued under other bishops until well in to the 16th Century. Only a few bits of the original Norman church survive in the present Cathedral.

In other words, it took more than 400 years to build.  But there was more.  In 1786, the west tower collapsed, severely damaging the West front as it fell.  A series of restorations followed – but they were in fact re-creations, with new designs and new additions – some of them controversial. These only concluded in 1908.  I make that somewhat over 700 years.  Does Hereford hold the record I wonder ? (I won’t count the new library built at the end of 20th Century to house the Mappa Mundi as this is not part of the Cathedral building as such).   I walked around the cathedral to enjoy its exterior and came upon a camp-workshop of stonemasons obviously engaged in some repairs. ‘Haven’t you finished it yet?’ I asked, glancing up at the building.

Then I went inside : 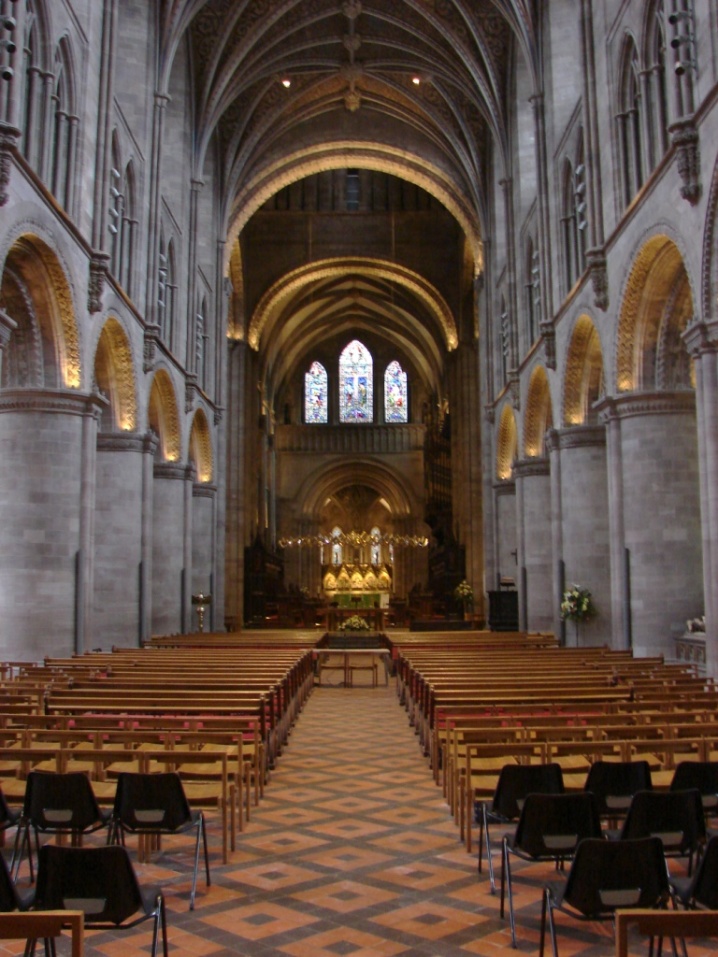 It was very golden. The suspended ring in front of the altar was certainly gold – well, gold-plated anyway. The arches – I couldn’t make up my mind. Were they painted gold or just illuminated that way ?  The columns and arches down the nave are part of what remains of the Norman re-build. The nineteenth century diamond floor tiling is also a visual treat.

The Cathedral is dedicated to both Saint Mary the Virgin and to Saint Ethelbert (or Æthelberht). Ethelbert was an 8th Century King of Anglia in eastern England. However, he happened to die – or rather, was murdered – on a visit to Sutton Walls, a hill-fort town four miles north of Hereford. Records of his life are apparently thin and unreliable, but it seems he went to Sutton to meet and to marry the daughter of King Offa of Mercia, who had his palace there. Only Offa – who was a more important king than Ethelbert – changed his mind about the marriage and had Ethelbert murdered instead. The lucky result of this was that Offa and his descendents found themselves ruling over Anglia, as well as Mercia. Ethelbert was obviously popular with someone though, because he was soon canonised by the church. Or, it may have been because Offa and the Church were at odds as to who should be in charge, and making a saint of Ethelbert was one in the eye to Offa. 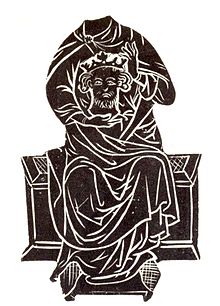 St Ethelbert and his head from a brass plate in Hereford Cathedral (Public Domain). 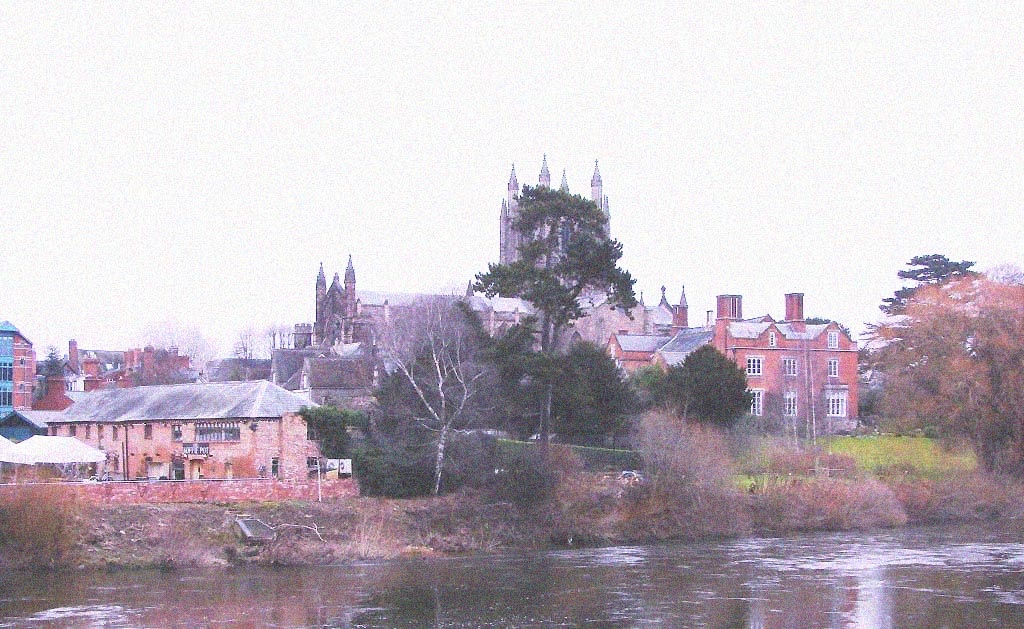 The new library building is to the right of the Cathedral. I paid my money and went in. The Mappa Mundi is displayed in a glass case in a round room which also has a rendition of the map hanging on another wall. This has numbers on it and an accompanying key which helped enormously in working it all out. 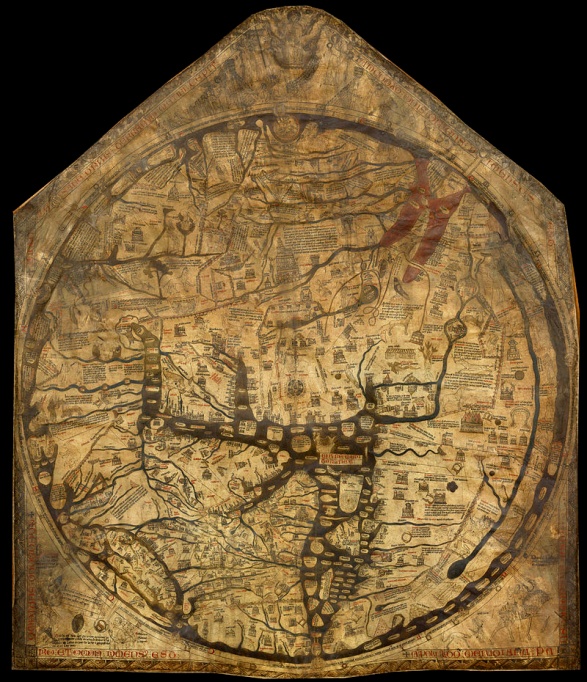 The Mappa Mundi is painted and drawn and on a sheet of vellum – calf skin – 62 by 52 ½ inches (158 x 130 cms), which makes it the biggest surviving Mappa Mundi anywhere. There used to be a much bigger one, the Ebstorf Map, which measured probably 12  by 12 feet (3.6 by 3.6 metres), but it was destroyed by allied bombing of Hanover in 1943. The Hereford map had been sensibly hidden away in a place of safety for the duration of the war – unnecessarily as it turned out as for some reason the Luftwaffe failed to target the cathedral in their strategic bombing campaign. It was also cleaned and repaired by the British Museum in 1855, so perhaps it was not quite as forgotten as I have suggested, but anyway, it was clearly not previously as advertised as it is now.

The world itself is depicted on the map as a circle some 52 inches (133 cms) in diameter. It does not look greatly like the world as we know it. But nor was it intended to. It is a deliberately Christian depiction of the world as then known, with Jerusalem and the Cross it its centre. Classical and biblical history and mythology, geographical and other ‘knowledge’, are all presented in a schematic form for easy understanding. It is in fact a handy, visual encyclopedia.

The garden of Eden sits at the top of the map, which is the East. The British Isles are located – not quite opposite – but just a little left of bottom centre – i.e. to the North-west. Hereford is marked there too, if you look very closely.  It was only by looking closely that I made a most startling discovery. A number of the tiny figures sketched on the map were curiously familiar . . . As I looked it became increasingly clear to me that the creators of the Hereford Mappa Mundi must have gone to school at the medieval equivalent of Hogwarts – and visited Narnia !  At first I noticed a centaur, a pheonix and a dragon. But these are common creatures and I thought nothing of it. I then spotted an unmistakable mandrake – three-quarters root-vegetable, one quarter person. Hogwarts.  Harry and co had to dissect them – or something – in one of their classes. (The mandrakes proved uncooperative).  But this was nothing compared to what I came upon next – a Monopod ! (`Voyage of the Dawn Treader’ ) – one legged, enormous-footed, kindly but daft, dwarves – also known as Dufflepuds. Incredible. Pauline Baines (illustrator of The Chronicles of Narnia) could have done the drawing herself. The map had them labelled as Sciapods, but I know my Narnia and was not fooled.

This was not the end of it. Having completed my study of the Mappa Mundi I moved on to the library itself. Leather-bound tomes lined the shelves – and each one of them was chained to their shelf ! Grimoires (books of magic spells) – Discworld, wizards, Unseen University Library ! I looked around – mostly upwards – to see if the librarian – a large orang-utan – was about. There was no sign of him. The librarians that were about appeared to be familiar with my hilarity, but were kind enough to humour me.

There are certain pedants who have suggested that a number of the creatures mentioned above were sourced by the modern authors from medieval bestiaries – illustrated compendiums of more or less known or imagined beasts, plants, and even rocks. One such literalist even suggests that C.S. Lewis may have sourced his Dufflepuds from the Hereford Mappa Mundi itself !

Bonus picture : a pair of Goosanders (Mergus merganser) on the River Severn in Hereford : 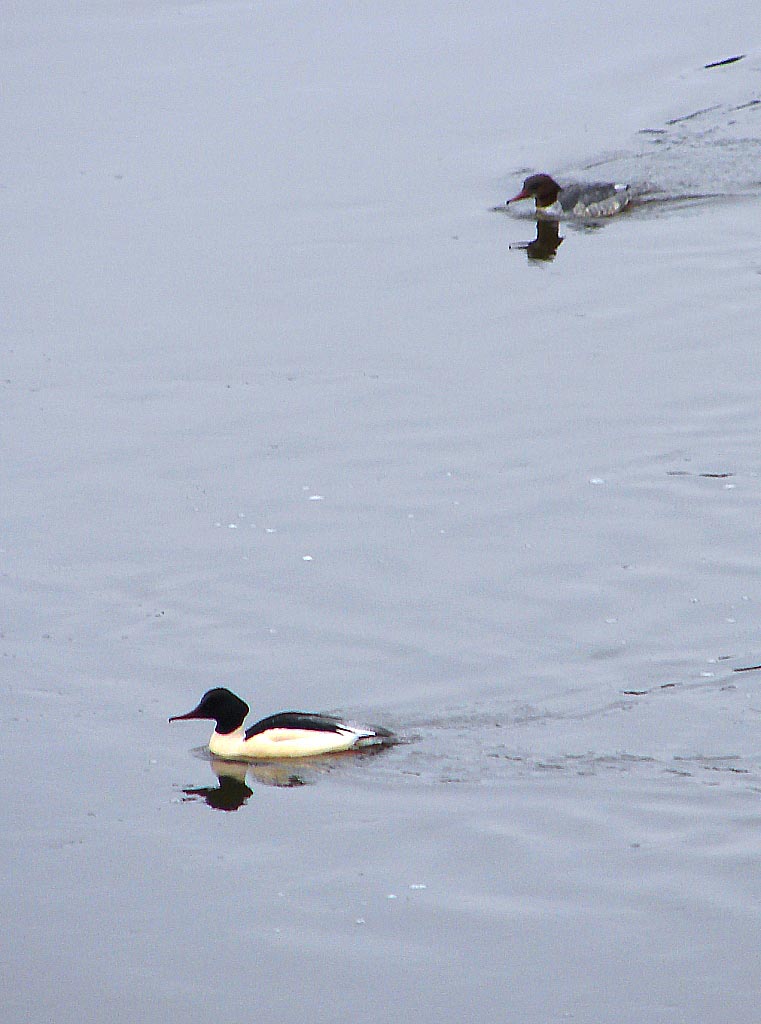