As land rises, rain erodes. In the case of Crete this has resulted in numerous gorges cut deep into the rocky landscape, especially in the South-west of the island. The most famous of the gorges – and the most popular to walk – is the Samaria Gorge, which cuts down through the White Mountains. It is grand in all dimensions: 16 kilometres long and up to seven hours to hike it; beginning at 1,250 metres above sea-level and ending, more or less, at the beach; nearly 300 metres deep and only four meters wide at its most intimidating.

I decided to try the Irini Gorge instead.

Irini Gorge cuts down somewhat west of Samaria. It is shorter and starts at a lower elevation – seven kilometres and 550 metres – and is never so deep or narrow. However, it had the great advantage for me that it begins on the road we had to take to get to Sougia – a small town on the coast where we had booked to stay a few days – and it ends only a few kilometres above Sougia on the same road. Splendid. I could be dropped off at the top and join the others in Sougia at the bottom.

The tourist guides tell you that the gorge begins at the village of Agia Irini/Eirini.[1] The village is really a hamlet and you have to leave the road – a track to the left signposted to the Gorge – to notice it. More importantly, there is a café just before you get there, on the road and on the right. We stopped for coffee there before I was abandoned to the gorge and the others drove on to Sougia.

I headed down the track – passing the brief hamlet to my left – under the shade of dark trees and beside a just about trickling stream. Disappointingly the trickle soon disappeared into the stream-bed. I had been hoping for a few stream-inhabiting birds – dippers or wagtails perhaps. There was nothing. Only a dry bed of pebbles and boulders.  Well, this was June.[2]

The track became a footpath and what had started as a valley soon became the gorge. Broken cliffs on either side – dark, pock-marked rock stained with orange, or grey-white where a fall had exposed fresh rock. Bright broken boulders cluttered the interior, piled up against the cliffs or tumbled to form a static torrent of stones. 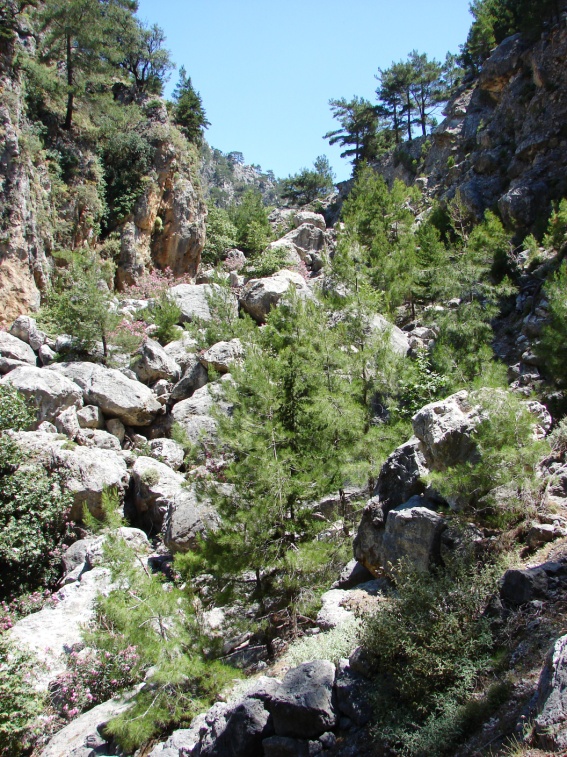 The gorge was nowhere very narrow and the path was never too difficult. Sometimes there were even wooden hand-rails, erected for the visitor’s convenience and safety. The path kept mostly above and to the side of the stream-bed, except when it wandered across to the opposite side. Often it climbed over falls of rock which had obviously buried an earlier route. Then it required some effort, and I was forced to find shade and recover for a while.

Lining the top of the cliffs, and wherever there was a ledge or a cleft in the gorge walls, there were pines. Black trunks and spikes of dark-green needles against the grey cliffs or the bright sky. The bottom of the gorge was filled with a mix of pines, cypresses and plane trees.[3] Lilac-flowered oleander bushes provided colour. The cypresses and plane trees provided most of what shade there was. Fragmented rocks littered the path and the ground between the boulders. 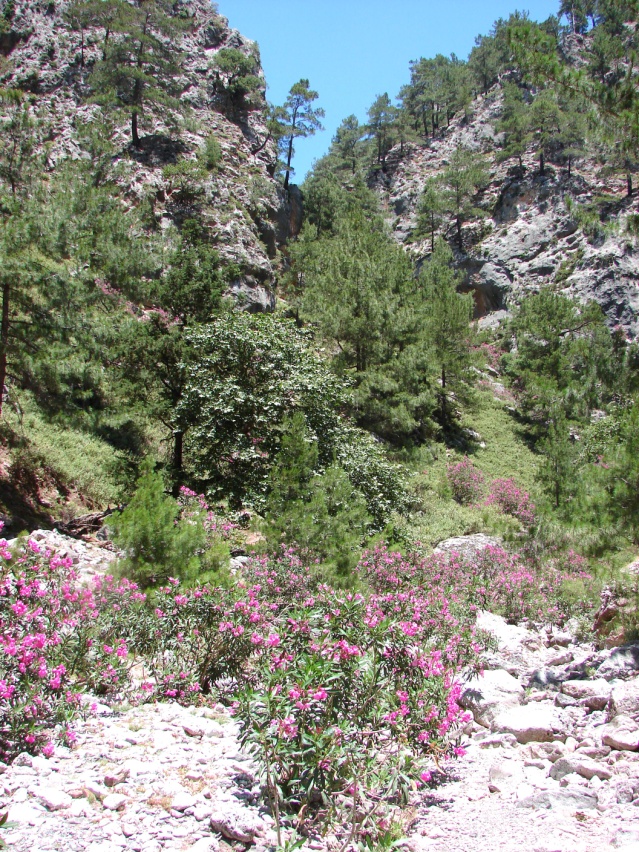 There were few birds – perhaps because it was the middle of the day when birds are generally least active, especially in summer. An occasional vulture crossed the narrow strip of sky above – griffon vultures (Gyps fulvus) – on broad wings, with stubby tails. There were blackbirds (Turdus merula) and wrens (Troglodytes troglodytes) among the bushes at the bottom of the gorge.

Mostly there were Sardinian warblers (Sylvia melanocephala). Sardinian warblers are common – in very slightly varing forms – throughout the Mediterranean – not just in Sardinia. I was already familiar with them, but they are always worth another sighting. They like undergrowth and the middle of bushes, but they are also happy to perch for a moment or two, close by and observable. What is most striking is their fire-orange eye ring against a soot-black head (melano-cephala), with feathers held so as to give a steep-fronted and half-crested appearance, and a white chin below. They are otherwise shades of grey. This is the male of course. The female is generally duller, and the orange eye ring less dramatic against a grey rather than a black head.

Somewhat more than half way down the gorge I came to a picnic area, with tables and chairs in the cool shade of plane trees. A group of walkers were resting there. They had chosen to walk up the gorge. We exchanged greetings and agreed how hot it was. I thought it kinder also to agree with their suggestion that they were now half way up the gorge rather than to tell how far they actually had to go, and how rocky . . .

I carried on down.

Finally, as the gorge faded, the cliffs became slopes and the path took to the stream-bed. Soon it opened out into rough-pasture fields with scattered trees, orchards possibly, and a broad valley. At this point it was easier to leave the stream-bed and walk on the adjacent road. Up the road  behind me I could see what might be a cafe which might offer refreshments . . . but I decided to keep going and find the road to Sougia.  Except that an old and familiar voice suddenly stopped me. It was a voice I had not heard for decades. Across the fields a turtle dove cooed softly . . .

Distance makes any dove or pigeon’s coo more delightful, but the turtle dove (Streptopelia turtur) purrs out its song with such delicacy that whether far or near is really neither here nor there.  It was wonderful.

As a lad I kept a pair of Barbary doves (Streptopelia risoria) – a domestic bird, used in biological research labs or – in their white form – in magic acts, appearing out of hats or from under coloured handkerchiefs. They were probably derived from the African collared dove (S. roseogrisea) but they are also very similar to the Eurasian collared dove (Streptopelia decaocto). In those days – when I was a lad – there were no collard doves about – they had not yet reached us in their range expansion North – so these Barbary doves – and their coo – were a novelty.[4]  Meanwhile, there were still wild turtle doves around every spring and summer. One pair chose to nest in a hawthorn tree beside my collard dove aviary.  I swopped the eggs over. My Barbary eggs with their turtle dove eggs . . .  I never saw any Barbary doves flying about afterwards, but I did end up with a pair of turtle doves in my aviary. The problem was, they were wild. When I tried to catch them I ended up with cast-off feathers fluttering everywhere.  I stopped trying to catch them.  I let them go.  (I had a similar experience with a wood pigeon’s egg I put under my domestic pigeons. Dreadful panic and feathers everywhere. I let it go too).

Hearing the voice of the turtle dove was a wonderful end to my descent of the Irini Gorge. Indeed, it was the best part.

Unfortunately I then had to walk down the main road to Sougia. An hour of baking sun and black tarmac. Mercifully, our hotel was on the road and not far into town. I recognised it by the prominent sign-board announcing its name (which I now forget) but also by noticing that my wife and our friend were happily relaxed on its patio in the cool of a broad sunshade-umbrella sipping iced coffee.

I needed a beer.