I first went to India, in 1979, as a post-graduate student and my priority on arrival was to get my work organised.  It was therefore some months before I finally had the time to visit a wildlife sanctuary.   I chose the nearest – Periyar, in the hills of Kerala.  This was my first opportunity to do some serious wildlife watching.  I was not disappointed.  Everything was new, and yet nearly all the creatures I came upon were already old and familiar friends.

In the mid 1960s, when I was at primary school, tea cards were the thing.  We collected these cards avidly, and won and lost great fortunes daily through playing flick-cards against the playground wall.  We also bargained and swopped until, by one means or the other, we had managed to collect full sets of fifty.  These cards were issued by a range of companies, but mostly by Brooke Bond, whose cards were almost wholly devoted to wildlife subjects.  They produced a series or two each year, covering birds, wild flowers, butterflies, fish and animals from Britain and across the world – including “Asian Wildlife” (1962) and “Tropical Birds” (1961).  By the age of ten I had effortlessly imbibed substantial knowledge of wildlife both in Britain and across the world – including in India.

When I arrived in the Periyar Wildlife Sanctuary, therefore, I was well prepared.   I was accompanied by my local friend and assistant Rajendran.  But he had never had the benefit of Brooke Bond tea cards, so it was up to me to identify most of what we were about to see.

Periyar Wildlife Reserve lies towards the southern end of the Western Ghat mountains.  It is centred around a many fingered lake which was created by the damming of the Periyar River in 1895.  The lake is surrounded by grasslands and tropical evergreen and moist deciduous forests growing on the slopes of surrounding hills and peaks.

We rode up into the hills by bus for some hours until we arrived at the village of Thekkady.  From there we walked into the reserve.  The narrow road ran between tall forest trees and close beside the lake.  In the water, perched on grey stumps of drowned trees with wings held wide to dry in the sun, were cormorant-like birds.  Darters.  (“Tropical Birds”).  Snakelike, ragged, prehistoric –  a thrill to finally see after such long familiarity. 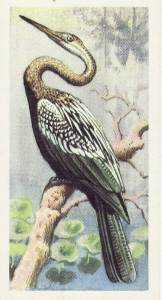 A few steps more and I spotted something moving in the branches above us  – a brown, cream and enormous squirrel –  an Indian Giant Squirrel (“Asian Wildlife”), providing for a moment an almost exact image of the picture on the card, before it turned and made off heavily through the branches. 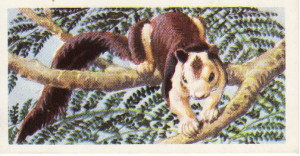 A few yards more and a herd of wild pigs burst out of the long grass and rushed across the road, long snouted, round bellied and black – indistinguishable in fact from the domestic Indian pig which roots and wallows in every village ditch.  But, these were wild pigs, and old acquaintances. 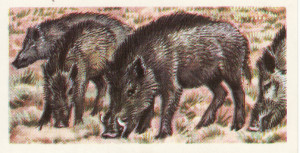 All this excitement within our first few minutes of arriving.  I was laughing with the delight of it all.  Quite what  Rajendran thought was going on I couldn’t say.

The next day we went out onto the lake in a motor launch, together with other visitors to the reserve, and my private adventure continued.  There were many more darters, and more wild pigs along the shore.  Then we spied a line of large animals making their way slowly across a distant hillside, too distant for a satisfactory view even through my binoculars, but I recognised them in an instant anyway.  Gaur – wild bison – the largest member of the cow family, adults and young, dark against the bright green of the grassland. 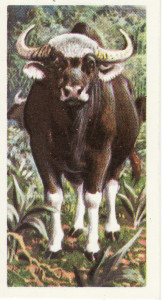 Next, wild elephants.  We could not have hoped for a closer view.  Seeing them at the edge of the lake, the helmsman brought the launch in close.   While a huge bull led his herd unhurriedly away into the forest, two cows and a calf plunged into the water towards us.  They stood knee deep – in the case of the calf, up to its chin – and proceeded to threaten us by swaying their great heads and splashing on the water with their trunks, making quite clear their displeasure at our intrusion. 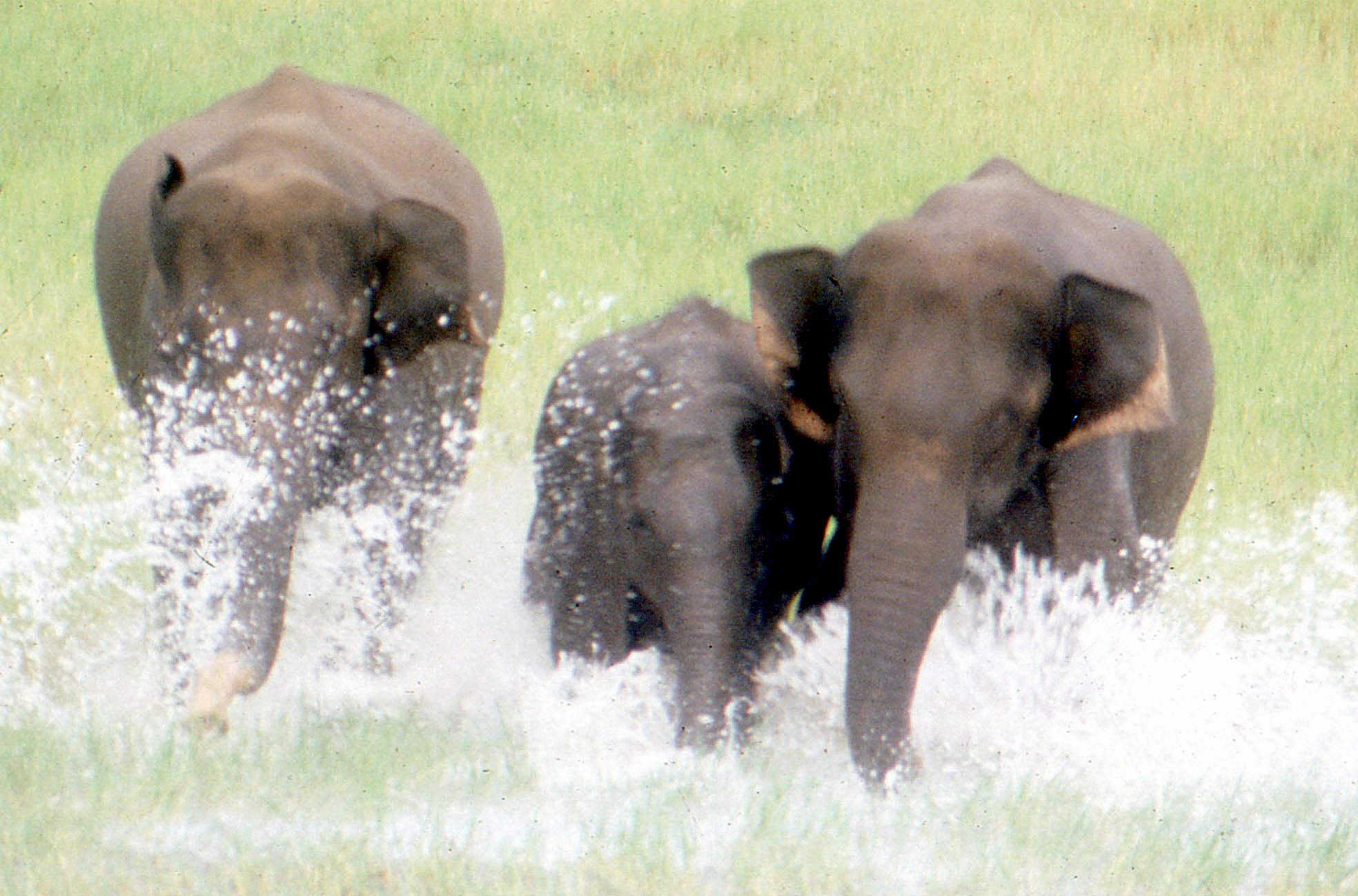 Elephants, of course, are hardly unfamiliar even to those who have never collected Brook Bond tea cards.  Nonetheless, the Asiatic Elephant is also there among them.

I’ve continued to meet old friends in the wild in India ever since: chital or spotted deer; nilgai antelope, or blue bull; a tiger in the scrub forest of Ranthambore in Rajasthan; blackbuck;  a gaur bull, huge and unhurried in the headlights of our jeep; hanuman langurs everywhere, named after the monkey-god hero of the Ramayana; giant fruit bats hanging like peculiar fruits by day or rowing soundlessly overhead at dusk; and mongooses in a back garden in Madras city (no cobra though). 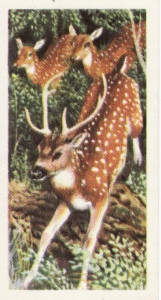 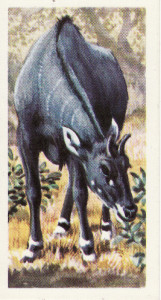 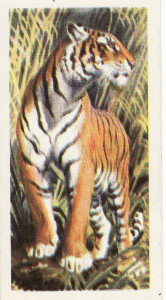 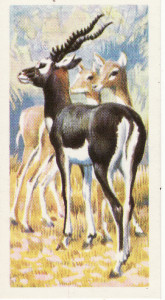 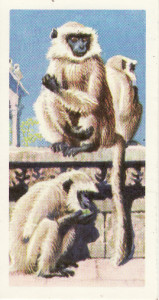 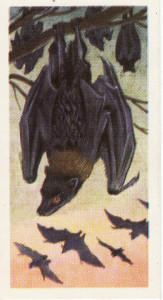 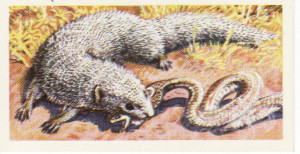 Not only mammals, but tropical birds as well: the iridescent fairy bluebird with its crimson eye, the painted snipe wearing white spectacles, and the orange (or scarlet) minivet, the males black and scarlet, the females black and sun-flower yellow. 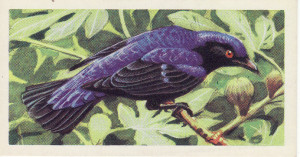 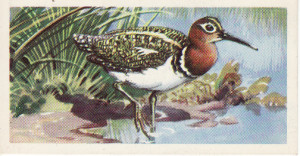 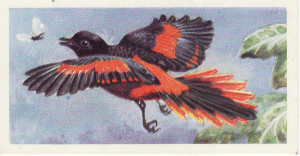 I still have my collection of Brooke Bond tea cards.  I even add to it occasionally, when an old album turns up in reasonable condition in a charity shop or on the internet.   I am also still on the look-out for old friends.  Even here in the UK there are a number of old familiars which I have yet to actually meet – the natterjack toad, the purple emperor butterfly and the ring ouzel for example.

If and when I do happen upon them, I will of course recognise them at once with a very special delight.