The long barrow at Stoney Littleton sits on the slope of its hill and not quite at the top.  It is a fine example of a Neolithic (new stone age) chambered tomb.

I found it via the village of Faulkland on the A366 (we are in the County of Somerset, by the way), taking the lane north from the centre of the village and, after a couple of miles, taking a right immediately after crossing the river over a bridge signed ‘Weak’.  Alternatively, you can head south from the village of Wellow. Both routes will deliver you to a small car park at a property called Greenacres. From there you take the footbridge over the Wellow Brook, turn left and climb the hill, then left again along the contour of the slope until you see the stile on your right and the barrow just beyond.

I disturbed a cock pheasant at this point. It leapt up in customary vocal alarm as if I was already in the process of strangling him. He got away safely.

I inspected the exterior of the barrow first, walking its length. I was immediately suspicious. The barrow was neatly walled around with thin, layered stones. Too neat I thought for so long an existence. I was right. The mound had been restored on a number of occasions. The first was in 1858, sometime after a local farmer had dug a hole in it to steal stones for building a road.  It was most recently restored in 1999/2000 by the Cotswold Archaeological Trust. It is now managed by English Heritage.  I came to the barrow’s entrance – and took a photograph : 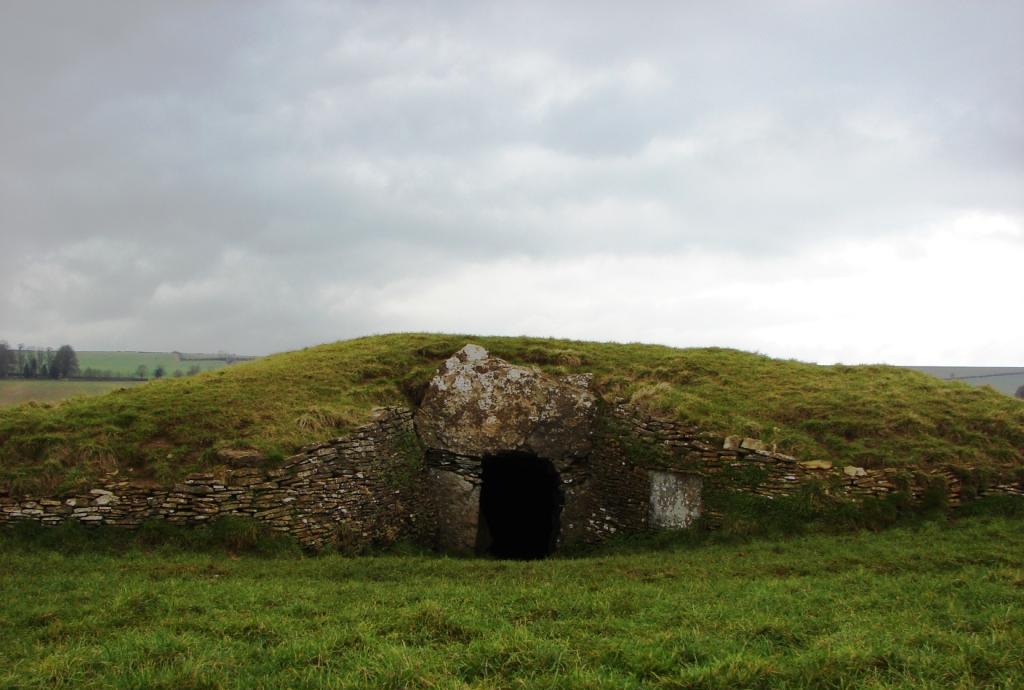 What was wrong with using this entrance to get in rather than making a hole ? Perhaps the vandal farmer was  hesitant to disturb the structure – and its inhabitants – so boldly and thought it less obvious to sneak in elsewhere.

I went in. I’d forgotten to bring a torch with me so vaguely hoped someone might have left a candle stub.  They hadn’t.  No matter, I could see enough of the passage from the light from the entrance.  I walked bent double, with my hand feeling ahead for protuberances.  There were side chambers, left and right, and a final chamber at the end. These were in utter darkness – until I clicked my lighter on for a brief and flickering view. Small chambers, made of stones. No bones.

This is the view from the end chamber back to the entrance : 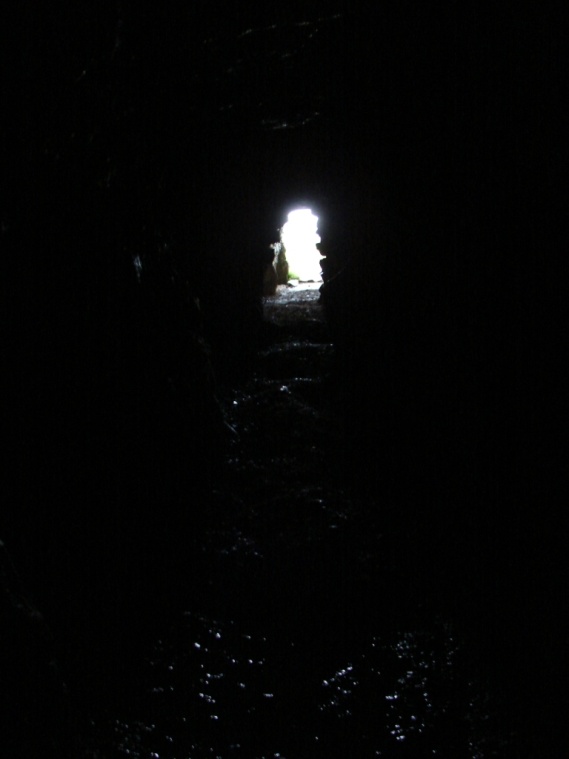 The question is, how long is this passage relative to the length of the barrow as a whole ? I guesstimated that the passage ran at least half way down. I was about right. The barrow is 98 ft (30m) long and the passage measures 42 ft (12.8m).

The passage roof dripped on me both coming and going.

The entrance, by the way, is roughly aligned with midwinter sunrise – perhaps because after that its re-birth all the way – longer days, new growth and spring.

On my way to Stoney Littleton I couldn’t help noticing an abandoned railway line. Single track. Middle of nowhere.  It seems that Wellow used to have a railway station and the line was the main route – from Bath to Bournemouth – of the Somerset & Dorset Joint Railway, commonly known as the S & D. Also known as the Slow & Dirty, or even the Slow & Doubtful. Affectionate nick-names, you understand. Very English. However, it is also true that it was never very fast, having to negotiate steep inclines over the Mendip Hills and many stretches of single track – where one train had to wait for another to pass. Still, it was famous even into the 1960s for transporting trainloads of summer visitors from northern parts straight to Bournemouthon the South coast. Otherwise it carried local passengers and goods, including coal from the Somerset coalfield in its earlier years. It was of course closed, in 1966, by the axe of the wicked Dr Beeching.

But I must be fair.  Even Barbara Castle, Labour Government Transport Minister at the time, agreed that it must go. This was despite a televised plea by John Betjeman (not yet  ‘Sir’) on the BBC in 1963 for sparing the S & D’s branch line to Burnham. This would have required the main line to be spared too. In fact Beeching mostly went for branch lines on the basis that they were loss making. Also, the government had already closed 3,000 miles of line before Beeching came up with his additional 5,000. In any case, he was only doing what he was hired to do – by the government.  The days of having railway lines serving every town and village in the country were gone. The costs were absurd and even with the late-in-the-day arrival of diesel locomotives the railways could not compete with the convenience of modern road transport.

Unfortunately no one was thinking about traffic pollution at the time, or road congestion.

Nor was anyone thinking about alternative and future uses of the railway lines – not the track, but the routes, which had in nearly every case  required enormous expenditure and an Act of Parliament to create them. British Rail abandoned most of them as quickly as possible, usually selling them off for little or nothing to adjacent landowners. Of course the blame belongs to the Government of the time. BR was just cutting its losses as required. But now we want the lines back, not just for steam railways – though that’s good – but for recreation, as walking, cycling and horse-riding routes.  A few miles of a few lines are still with us and used for these purposes. Thousands of miles have gone, forever.  We’ve got motorways instead.  I wonder what will happen to them ?