Darwin, capital of the Northern Territories, is Australia’s northern-most city.  The region around  is therefore known as the Top End.  Its climate is tropical.  Its birds are splendid.  We arrived there – from London – at four o’clock in the morning.  We sat out in our friends’ back garden under a full moon and stars, until the sky lightened and the sun rose.  I don’t believe I have ever seen a suburban sky so busy with birds.

The first up, however, was not in the air but in a tall eucalyptus across the street.  A chaos of song burst out from the canopy at the first hint of dawn.   The singer was not about to reveal itself easily though, and it took a while even to locate it.  As is often the case, this loudest voice turned out to come from a smallish, undistinguished bird, grey mostly, though pale olive on the wings and tail when I managed to catch it at the right angle.  A Brown honeyeater – scientifically, Lichmera indistincta.  However, as if to belie both my first impression and that of the scientist who named it, longer and more detailed inspection revealed that it also sported a distinct pale tuft of feathers immediately behind the eye.  Not a common feature in my experience.  Most birds prefer an eye stripe or a supercillium – a stripe above the eye – if they’re going to have something distinguished in this area.  The Brown honeyeater also turns out to be famous for its song, some even claiming it to be the best singer of all Australian birds.  But don’t think the sweet notes of a Song Thrush.  Think ticks, whistles and rapid repetitions mostly, with only an occasional note of musicality.  But then that’s its claim to distinction  – acoustic acrobatics, then suddenly, a pure musical note thrown in to delight the listening ear – or rather, to declare its presence to others of its species.   I also woke one morning, early again, outside of suburban Darwin, where there were Brown honeyeaters  in every tree.  The combined cacophony was quite stunning.

First in the sky, still before the sun was up, were random flights of Black kites, ragged and lanky, soaring with constant adjustment to the wind of their wing tips and forked tails – or flapping lazily when unavoidable.  Some passed over at height while others flew low, as if to get a good look at the odd phenomenon of this equally early-bird looking up at them.

I heard the Sulphur-crested cockatoos coming before they arrived.  They came hurtling over the palm tops calling to each other raucously in greater or lesser  flocks and from a variety of random directions.   Their tails seemed oddly squat and stubby as they passed, until I realised that it was actually that their wings that were unusually broad from front to rear so that the tail was shrunk by comparison.  They were soon followed by other members of the parrot family :  pink and grey Galah cockatoos and Red-winged parrots  – or rather, startlingly crimson-winged  parrots, with dark blue, and light blue, and all on brilliant parrot green. The sort of thing a child might paint given pots of primary colours.

Also with noticeably broad wings, pied Magpie larks settled noisily on a rooftop aerial.  A curious bird.  Its head and beak gave at least some vague impression of a lark.  Its body and lengthy legs were more reminiscent of a wading bird such as you might find at the sea shore – a plover for example.  Which is why, perhaps, its also sometimes known as a Peewee.  (In fact the taxonomists seem to have difficulties with the bird too.  It is classified in a group of its own, without kin,  in Australia at least).

Bar-shouldered doves settled in the neighbour’s trees and proceeded to make gentle imitations of the Common cuckoo.  Imperial pigeons, brilliant white except for steel-grey outer flight feathers and a surprising semi-chequer-board pattern under their tails, were quite silent.  Squat Rainbow bee-eaters perched and dashed from the front fence, then thwacked their hapless prey into submission against the metal railings.

I soon noticed that the Brown honeyeater in the eucalyptus was not alone.  There was another, slightly larger but noticeably similar bird busy in and out of the foliage, but it had a distinct pale patch of feathers at the base of its bill rather than behind its eye.  I had some difficulty pinning this one down, but eventually settled on the White-gaped honeyeater.   Smaller and more delicate Rufous-banded honeyeaters flitted among the stems of yellow cluster-canes close beside my chair. Conspicuous male Fig birds arrived in the coconut palms, yellow-bellied, green backed and wearing  red masks.   There were females with them, wearing speckled breasts, but otherwise a very dull brown.  Friarbirds, looking very prehistoric with their bare black faces and protrusion at the top of their bills,  looked down on me severely from the neighbour’s trees.  They are members of the honeyeater family too.

There must be a lot of honey about, I thought.

Most members of the parrot family are always in a hurry, in the air at least, and the cockatoos and parrots I’d seen so far proved the rule.  However, to contradict it, Red-tailed black cockatoos came gliding slowly over on wingspans as wide as a kite’s, or flapping languorously when needs must.  I was surprised by a flock of these cockatoos later on.  They are big birds, and the males have bright red tails above and below.  But they are otherwise mostly black, which is presumably why we didn’t see them until they exploded from the ground only a few yards ahead. 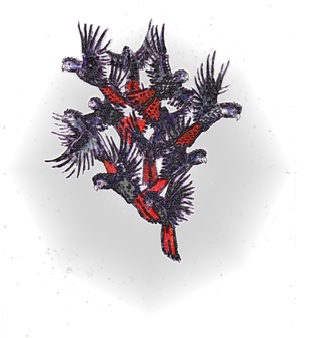 Most members of the parrot family are colourful, but some are excessive.  Red-collared Lorikeets arrived wearing much else besides :  red bills, blue faces, orange breasts, black bellies, yellow and green backs and behinds.  Truly a product of the paint-by-numbers approach to creation, and utterly inadequate on the naming front.

It took me a couple of days to adjust from UK to Darwin time so I was up again before dawn for the next two days to hear the Brown honeyeater and to watch the skies, but neither morning was half as busy as that first.  The weather had changed to cooler, cloudier and more breezy.  Maybe the birds, being of a tropical disposition, were less inclined to be up and about so early as a result.  Or maybe they had quickly learnt to avoid this particular garden with its odd observer of their comings and goings.  Or perhaps my perception had changed – there’s nothing makes such an impression as the new.  But  I prefer the weather hypothesis and I count myself lucky that I happened to arrive on a Top End morning when the local avifauna put on its very best display.