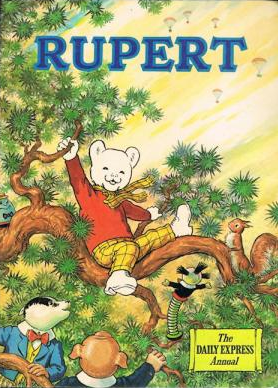 When it comes to fictional bears in Britain, there are three great allegiances:  to Paddington, to Poo and to Rupert.  It may be that your family sensibly enjoyed all three.  Mine was exclusively devoted to Rupert.   This was the doing first of my Great-Uncle George and then of my Mother.   On the 3rd November 1930  Great-Uncle George cut out from the Daily Express newspaper part one of  a  new Rupert adventure  ‘Rupert and Bill keep shop’.  He did the same each day until  the adventure was complete and then gave the cuttings to his niece – my mother.  He continued to do the same, almost without interruption, until the 5th February 1937.

Rupert continues his adventures in the Daily Express and in Rupert Annuals even now.  New artists took over after Bestall retired in 1965 – but they were all obliged to follow him closely.  Since 2010 the paper and the annuals seem to

rely on recycling old stories.  Fortunately there is no shortage – and the audience, of course, is renewed constantly.