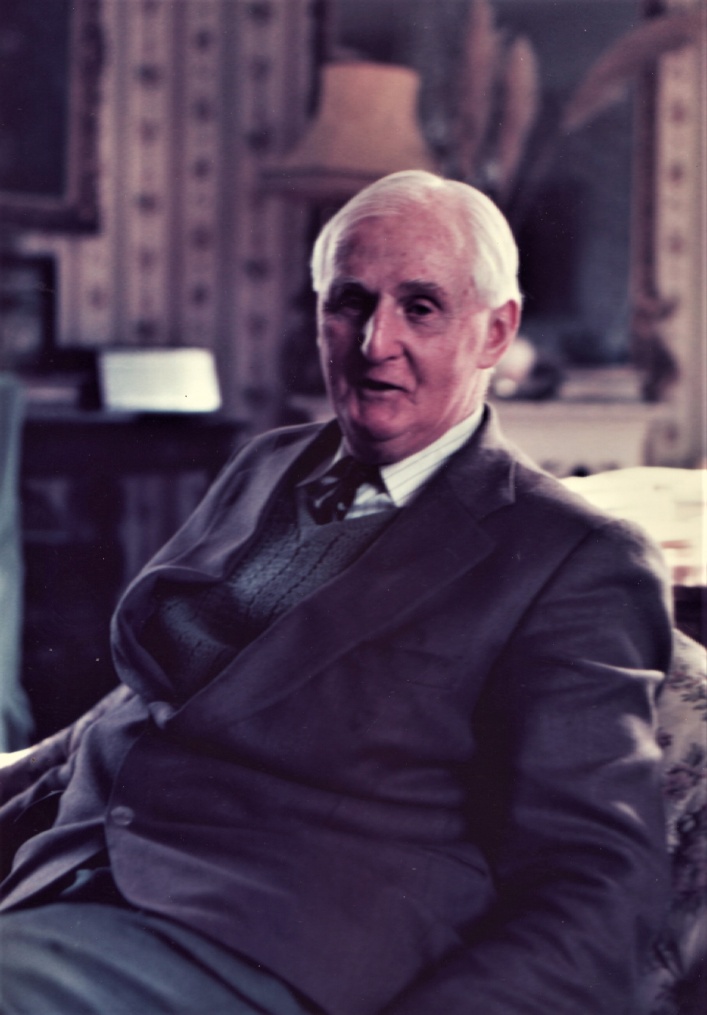 I first met Commander Richard Phillimore RN (Rtrd) in about 1968 when a friend took me to the Stamp Club which Richard hosted in the playroom of his ancestral home, Shedfield House, near Southampton.  The room had been Richard’s playroom when he was a boy, in the 19-teens’s.  Now it was full of young people again, swapping stamps.  It was not that Richard was particularly interested in stamps, it was rather that he was committed to helping young people, both practically and spiritually.

Richard first got  involved with young people when he was a junior officer in the Royal Navy in the late 1930s.  He was put in charge of boy recruits sent from shore based training establishments to his ship.  He was disturbed to find that they all behaved like zombies, highly disciplined and without personality.  He tried to encourage them to be individuals. (What his superiors might have thought of this approach is unknown . . . ).  But the key event in Richard’s commitment to young people came in 1940 when he found himself about to crash- land in an RAF Wellington bomber which had ran out of fuel.  Richard prayed for the crew and for himself.  He promised that if he should be spared he would like to give his life to helping young people.  He was spared, but he was left hanging upside down from the wreckage trapped by his twisted legs.  He was told by his doctors that he would never walk again.  Fortunately this proved not to be the case and after expert medical care he was back playing cricket – his favourite game – within a year.

I met Richard a few years after he had met the Focolare – an ecumenical movement originating in Italy.[1]  He was always looking for new spiritual movements, especially those which might be attractive to young people. He had gone to a Focolare meeting in London and inspired by what he had heard, he came home and started a group for young people.  I was one of those who became involved, attracted by the practical advice of how to put love into action.  Richard provided us with a place to meet and with transport in his old Volvo to meetings where we spoke about our experiences of trying to put love into practice.  He also took us to the annual Focolare Mariapolis in Manchester and to meetings in London.  He took groups to Focolare centres in Rome, Loppiano and Vallo and to Belgium. There were always young people coming to stay at Shedfield House, including from Belgium and from Northern Ireland – a mixed group of Catholics and Protestants.  Sometimes, however, Richard’s enthusiasm could perhaps overrun his understanding.  He once organised his own Mariapolis for local young people, somewhat to the alarm of the Focolare HQ in London, who only heard about it at the last minute !

The Focolare /GEN was only one of Richard’s many spiritual adventures.  At home he was a stalwart of his local Anglican Church and a Sunday-school teacher.  He was also involved with a local Community Church,  with an Alpha Group,  and with the YMCA, helping to tackle the very practical problem of homelessness and rough sleeping among young people in the 1980s.  He also took a group of young people to Taizé in France.

In 1996 I asked Richard if he wouldn’t mind me interviewing him in order to write a brief article on his life and role in the village, as a farmer and local Squire.  I was planning on an hour or two.  “We might as well start at the beginning”, he said, and proceeded to recount his entire life in month by month – sometimes week by week – detail.  We finally finished nearly one year later.

I was particularly fascinated by his experiences during the Second World War.  He had flown as an observer in Fairy Swordfishes and Grumman Avengers.  He had been deputed by his Admiral to check out the new rockets that the RAF were fitting to Hurricanes and Typhoons – which is how they came to be fitted to Swordfishes too.  He had visited Hiroshima only six weeks after the bomb.

However, he was particularly interested in telling his spiritual adventures and in 2000 Richard produced his own version of his life, entitled  ‘A Spiritual Odyssey’.

I had clearly failed him.[2]

Richard’s autobiography is a fascinating account of Richard’s thoughts and explorations of spirituality over his long life.  Near the end he writes :

‘I hope that this short book may be of value to lay people and especially to those like myself, who are of an inquisitive nature, and want to know what is God’s will for us on our Christian pilgrimage.’

He was indeed spiritually inquisitive, and he always kept to his promise to try and help young people find both themselves and God.  It was a privilege to be his friend.  Richard passed away in 2004 at the age of 97.

[2] I never did write my intended article.  However, my notes and recordings of the interviews now form part of the Phillimore Papers archived in the Hampshire Records Office.  So too does ‘A Spiritual Odyssey’, which you can read  here via the Menu tabs.