By the early 1960s, cigarette cards had long gone – ended by the austerities of the War – but tea cards had replaced them. The games that my father used to play with cigarette cards, we learned to play from our older schoolmates with the new tea cards – or, more correctly, trade cards. We collected them avidly, and won and lost great fortunes daily playing the game of flick cards.

Two boys (only boys) would stand some eight feet or so from a playground wall, each armed with a handful of cards. A card was held between two fingers and then launched towards the wall, by each player in turn, by means of a quick flick of the wrist. There were two versions of the game. The object of one was to get your card to land on another already lying on the ground. The first player to achieve this won all the cards previously thrown. In the other – known as ‘Death’ – the aim was to knock down two or more cards that had been lent against the wall. The player that toppled the last card was the winner and, again, took all the cards already thrown.

‘Death’ called for accuracy and a strong wrist, but in terms of rules was uncomplicated. In the other game, however, as with many children’s games, the simple scenario of the one card landing on another was qualified by a number of arcane requirements. Should a card overlap another by only its merest edge – defined by the thin white border surrounding the card’s illustration – this was called “tipses” and did not count. All ambiguous overlaps were anxiously examined at close quarters. If necessary, spectators would adjudicate. If the case was judged to be “tipses” the game continued. Should a card stall in mid flight and flutter down onto another, this was called “flutters” and was also invalid. So too was “undies”, where a card slid beneath another on landing. With these rules, vast numbers of cards could accumulate, and tension intensify, before at last the prize was won.

These tea cards were issued by a range of companies but circulation was dominated by Brooke Bond. At that time, their cards were almost wholly devoted to wildlife subjects. They began in 1954 with “British Birds” and thereafter produced a series or two each year, covering birds, wild flowers, butterflies, fish and animals from Britain and across the world. By the time we started collecting, probably in 1963 or ‘64, cards from the very first series were hardly to be found – occasional and somewhat mysterious relics of some ancient past. However, subsequent sets were still in circulation and new sets kept arriving, providing fodder for our boyish kleptomania as well as for our effortlessly assimilative young minds. 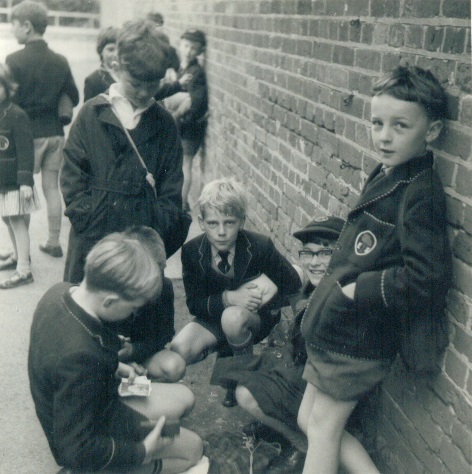 I inherited an interest in wildlife from my parents, but there is  no doubt that Brooke Bond’s tea cards fed that interest and caused it to grow and become knowledgeable. By the age of ten I not only knew my British birds – those illustrated in “Bird Portraits” (1957) and “Wild Birds in Britain” (1965) at any rate – and my butterflies (“British Butterflies”, 1963) and wild animals (“British Widllife”, 1958) – but I was also familiar with the wild animals of Africa and Asia (“African Wildlife”, 1961; “Asian wildlife”, 1962), exotic birds (“Tropical Birds”, 1961) and endangered species from across the world (“Wildlife in Danger”, 1963). 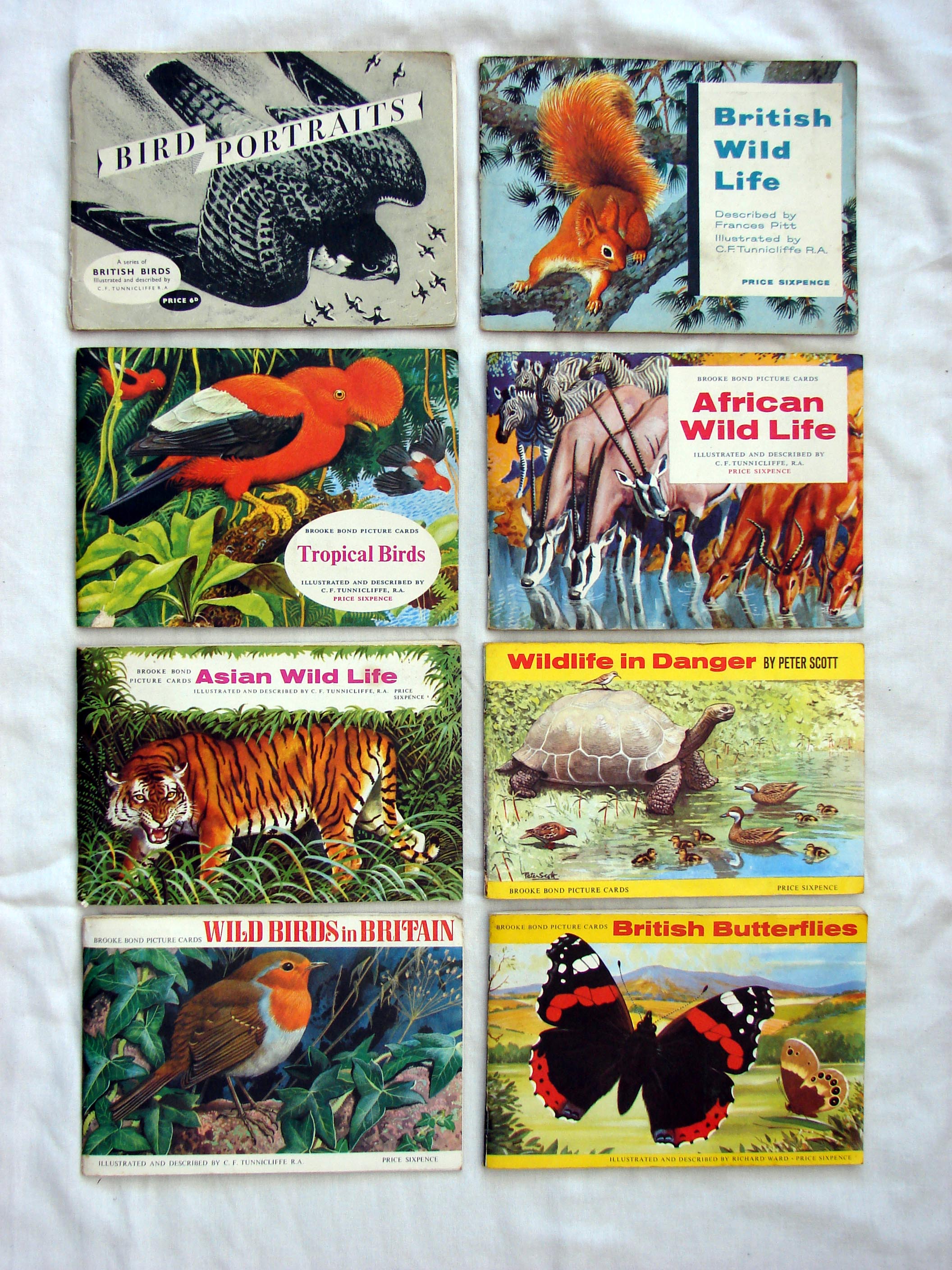 All these sets were explicitly “issued in the interests of education”, according to the backs of the albums in which we stuck them, and they clearly served their intended purpose. It’s a pity then that although Brooke Bond continued to issue picture cards, they later stooped to trivia – cartoon turtles for example, or anthropormorphised chimpanzees – offered, presumably, in the interests of increasing sales.

To be fair, Brooke Bond continued to return to wildlife subjects, and to other educational topics, including in collaboration with the World Wildlife Fund, as they first did with “Wildlife in Danger”. What they did not do, however, was to maintain the pictorial quality of the earlier sets, a feature which was at least as important as the information they conveyed in catching and keeping our interest. Between 1957 and 1966 those early sets were more often than not illustrated by C.F. Tunicliffe, whose both naturalistic and visually attractive style of painting was perfect for our unsophisticated eye – and our desire for facts. Some of his illustrations still rank among the finest examples of wildlife art, those for “Bird Portraits” in particular – the teal leaping from the water; the house sparrow in flight; the barn owl floating cream and white against the dusk :

Tunicliffe’s work seems to have established a house style during those years, so that when other artists were brought in – EV Petts for “Freshwater Fish” (1960); Richard Ward for two butterfly series (“British Butterflies”, 1963 and “Butterflies of the World”, 1964) – the cards remained instantly recognisable as coming from Brooke Bond.

I rediscovered how much I had learnt as a child, how many animals and birds had become familiar to me through collecting Brooke Bond’s tea cards, many years later. I was living in South India and I went with a friend to visit the Periyar Wildlife Sanctuary in the southern state of Kerala. The Sanctuary is set in the forests of the great chain of the Western Ghat mountains, centred around a long and many fingered lake created by the damming of the Periyar River.

We rode up into the hills by bus and then walked from the village into the reserve. The narrow road ran between thick forest on one side and the lake on the other. In the water, or perched on grey stumps of drowned trees with wings held wide to dry in the sun, were thin, cormorant-like birds. I knew at once that they were darters (“Tropical Birds”, 1961). They are not the most beautiful of birds – snakelike, ragged, prehistoric – but they were old familiars and a thrill to see for the first time in the feather.

Shortly afterwards I spotted an animal moving in the trees above us, a brown, cream and enormous squirrel – the Indian Giant Squirrel (“Asian Wildlife”, 1962) – providing for a moment an almost exact image of Tunicliffe’s illustration, before it turned and made off, heavily, through the foliage.

A few yards further on a herd of wild pigs burst out of the long grass and hurried across the road, long snouted and round bellied – indistinguishable in fact from the domestic Indian pig which roots and wallows in every village ditch. However, these were wild and also familiar  from “Asian Wildlife”. 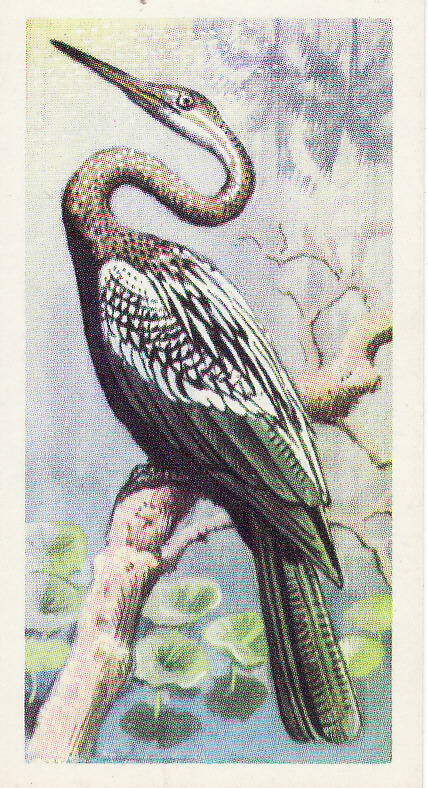 The next day we went out onto the lake in a motor launch, together with other visitors to the reserve, and my private adventure continued. There were many more darters, and more wild pigs along the shore. Then we spied a dark line of animals making their way slowly across a hillside, too distant for a satisfactory view even through my binoculars, but instantly recognised anyway. These were Gaur, the largest member of the ox family.

We could not have imagined a closer view of the wild elephants we came upon next. Seeing them at the edge of the lake, the helmsman brought the launch in close. While a huge bull led his herd unhurriedly away into the forest, two cows and a calf plunged into the water towards us. They stood knee deep – or in the case of the calf, up to its chin – and proceeded to threaten us by swaying their great heads and splashing on the water with their trunks, making their indignation at our intrusion  clear. Elephants, of course, are hardly unfamiliar even to those who have never collected Brook Bond tea cards. Nonetheless, the Asiatic Elephant is there among them.

I have continued to meet old friends in the wild in India ever since: Chittal, or Spotted Deer; Nilgai antelope, or Blue Bull; a Tiger in the scrub forest of Ranthambore in Rajasthan; Blackbuck; a Gaur bull, huge and unhurried in the headlights of our jeep, in Andhra Pradesh; Hanuman Langurs, named after the monkey-god hero of the Hindu epic poem the Ramayana; Giant Fruit Bats hung like peculiar fruits by day or rowing soundlessly overhead at dusk; and Mongooses in a back garden in Madras city.

I still have my collection of Brook Bond tea cards, won so many years ago, or bargained for “swops”. I add to it occasionally, when an album turns up in a charity shop or on e-bay.  And even now, here in the UK, there are a number of long familiar birds and animals which I have yet to meet – the Natterjack Toad, the Purple Emperor butterfly and the ring ouzel for example.  If and when I do happen upon them, I will, of course, recognise them at once with a very special delight.