For a Greek Orthodox monk looking to get away from the world the great rock pillars of Meteora were, for centuries, just the thing. Isolated, impregnable and half way to heaven.

I will explain shortly. 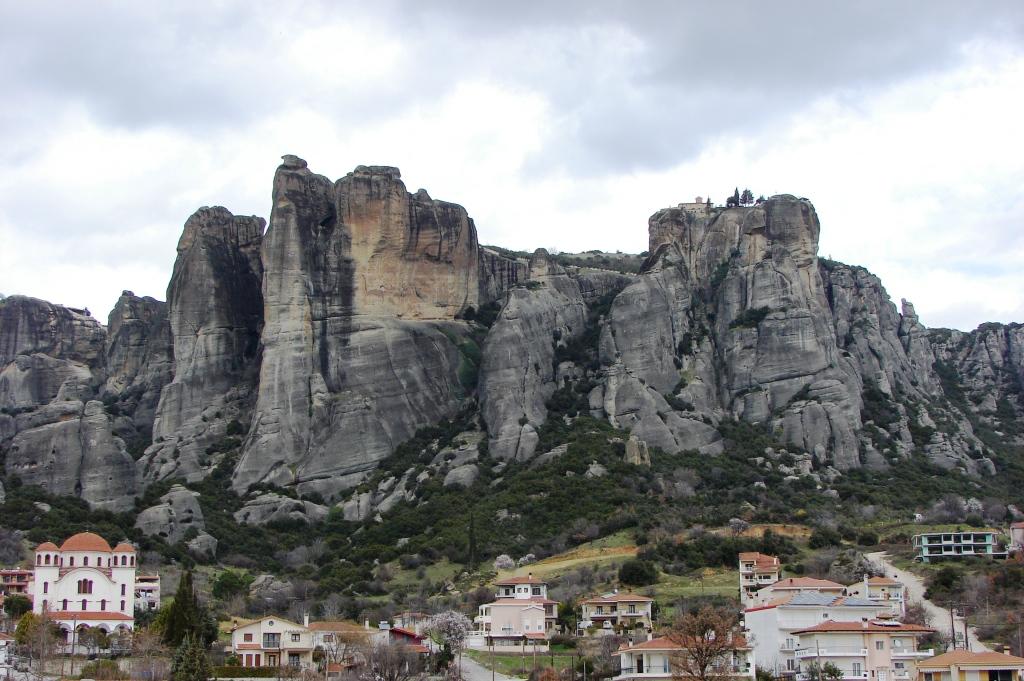 These are the pillars of Meteora as viewed from our hotel balcony in the adjacent town of Kalabaka. This is central Greece, with the Pineios River winding through the valley below and the Pindos Mountains opposite. After dark, the pillars were artificially illuminated from beneath so that their connection to the earth was gone and they appeared to be hanging, hovering, in the air. Meteora in fact means suspended in the air.

Ascetically inclined monks first moved up there in the 9th Century. Being also of an hermitic persuasion, they each occupied their own hole or hollow in the rocks – and only met up on Sundays for church.  Others followed. By the early 12th Century, monasteries had been built.  In the 14th Century the largest of the monasteries – Great Meteoron – was established by a group of monks who preferred the isolation of Meteora to their former home elsewhere. Like the other monasteries it was made deliberately difficult to get to. Access for both supplies and people was only by ladders or in nets hauled up by rope. Legend has it that, trusting in the Lord, the monks only replaced the ropes when they broke . . .

This splendid isolation was not only for religious reasons but also to avoid the turmoil going on below. By the late 14th Century, the Christian Byzantine Empire was crumbling and the Ottoman Turks were geographically expanding. They finally occupied mainland Greece – including the environs of Meteora – in 1460.  The monasteries survived, however, and even multiplied. By the 16th Century there were some twenty-four monasteries perched variously on the pillars of Meteora. The numbers of monks – judging by the size of the establishments – must have been in the hundreds at least.

In 2015 there were only six functioning monasteries – or rather, four monasteries and two nunneries – occupied by a mere fifteen monks and forty-one nuns respectively.

We visited Great Meteora and saw no monks at all. The gentleman on the entry till was clearly a secular employee. This is not surprising. There are only a handful of monks left.  Mind you, they do look after their predecessors : 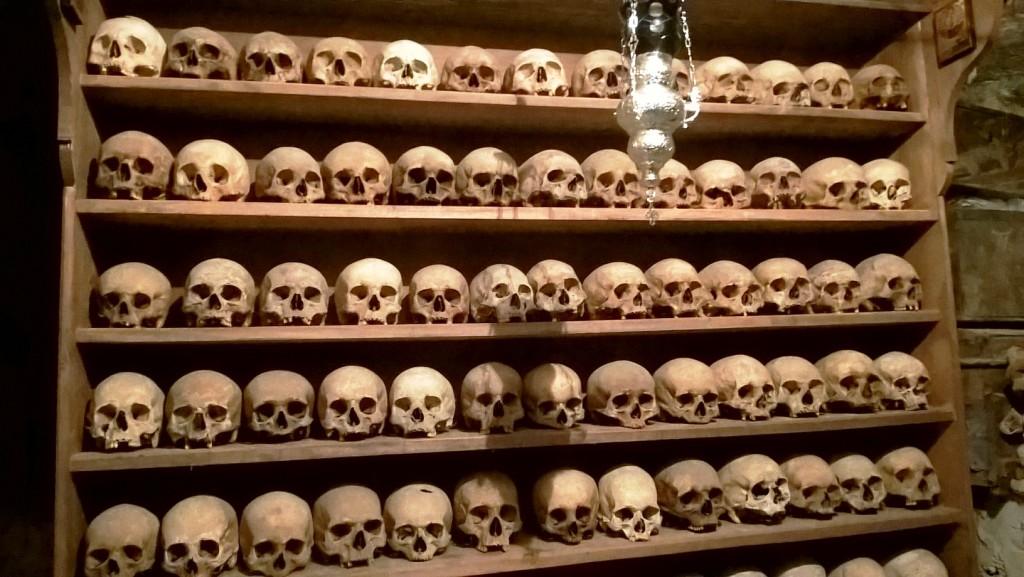 Whether anyone knows precisely who these skulls belonged to was not clear.   Nonetheless, they serve, no doubt, as a helpful reminder to the monks – as well as to visitors – of their mortality.

We also visited the Nunneries of Rousanou and of St Stephen (this is the one visible in the photo from our hotel balcony). There we were greeted by smiling, chatty nuns on the tills, happy to welcome us to their homes – and to take our entrance fees. The nuns only moved in to St Stephen’s in 1961. It had been bombed to bits by the Germans during the Second World War on the suspicion of harbouring the resistance.[1] The nuns rebuilt and expanded St Stephen’s until it is now the most populated of the establishments – twenty-eight nuns in residence in 2015.

No doubt one reason for the decline in the numbers of both monks and monasteries (its not clear about the nuns) is that fewer folk feel called to the vocation. However, it also seems to be that those who wish to lead a quiet and contemplative life have gone elsewhere. The Meteora monasteries first began to become more accessible in the 1920s when bridges and rock cut steps were constructed to reach them. In the 1960s a road was built, up from the valley below.  In 1980 Bond arrived.

Sometime in October 1980 a Hollywood film crew descended upon Meteora. The monks were not amused. It seems that a Greek Bishop had agreed – for a consideration – to allow filming in the monasteries but forgot to ask the monks first. The matter went to court, which decided that while the monks owned the interiors of their monasteries the exteriors and surroundings were publicly available under the ownership of the local council. The monks did their best to sabotage the filming, adorning the monasteries with flags and bunting – and hanging out their washing. The movie crew were obliged to build their own mock-monastery on an unoccupied pillar and another back at the studio. But the damage was done. Once the world had seen the drama of Meteora in the movies it now wanted to see it in person. In 1988 Meteora was designated a UNESCO World Heritage Site. Now the monasteries entertain thousands of visitors a year. Quite right too. Apologies to the monks (the nuns seem to have adapted), but, together with nature, their predecessors have created a drama which they are duty bound to share with the world.

The Bond in question, by the way, was Roger Moore, and the movie For your eyes only (1981).

You might reasonably have thought that the Meteora pillars must be made of some kind of volcanic extrusion, a hard and weather-resistant rock. In fact they are sedimentary – sandstone and conglomerate which accumulated at the bottom of a lake or sea and were then up-thrust. Quite how they have remained so mighty remains a geological puzzle. 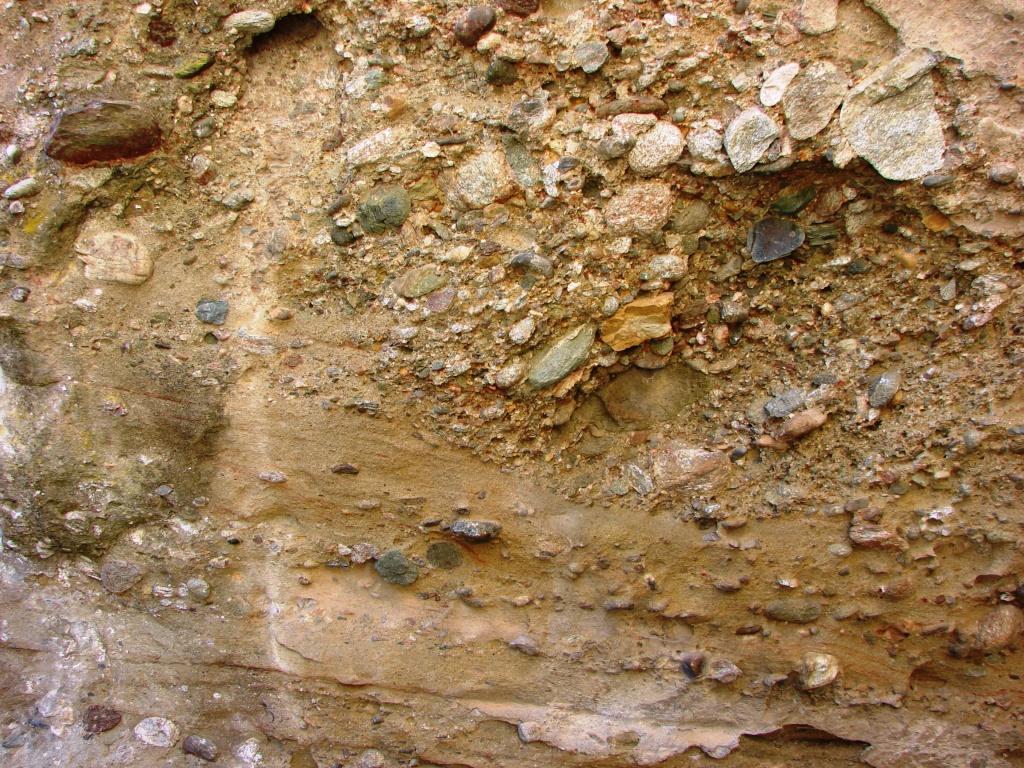 As we stood on the top of Meteora a party of five white headed cormorants (Phalacrocorax carbo sinensis) flew over at a great height.  They were heading north and away from the river and the valley. Where were they going, I wondered ? But then the same thought appeared to have occurred to them too. They suddenly changed course and headed down the river valley instead.