We arrived in Athens just in time to enjoy the customary flying of kites on Clean Monday (Καθαρή Δευτέρα). This is the first day of the Eastern Orthodox Church’s Great Lent – as well as, traditionally, the first day of Spring. It is also called Pure Monday, referring to the leaving behind of sinful attitudes – and of non-fasting foods. That is, being Lent, the usual delicious dishes are forbidden. Only special fasting foods are allowed.

Fortunately for the Greeks non-fasting foods include elaborate sea-food dishes served with a special bread topped with herbs and seasoned with olive oil.

Those of us in the British tradition are enjoined to eat pancakes.

We gathered on open slopes below the Ymittos Mountains, east of the city, above an ancient monastery and beside a tennis club. It was threateningly overcast and grey – but there was a good breeze. Everyone was flying – or trying to fly – kites.  They were of multifarious shapes, colours and design, but they were all with long streamer tails. It was a thoroughly families affair. Children ran with the kites and threw them into the air while fathers tugged on the strings. Or vice-versa. Mothers too. Everyone ran in front of everyone else.  It was a chaos of people and string.

And yet the kites flew ! 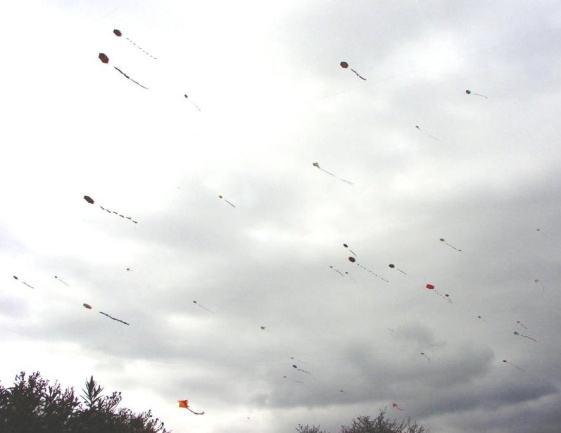 Clean Monday is a public holiday. The next day was back to work – including for my wife who had duties to perform at a local University. This meant that I was forced to look for something else to do. I decided to visit the zoo.

The Attica Zoo is located out of town and I had to take a local bus for half an hour, disembark in the middle of nowhere and walk down a long stretch of sun-baked tarmac road to reach it. It was opened in 2000 and it is, it seems, the first and only zoo in the whole of Greece.  I chose the zoo mostly because – especially when out-of-town – zoos are usually a reasonable place to go birdwatching. Wild birds I mean. The local avifauna. Not necessarily the best location in the area, but at least the local zoo is always accessible by public transport. And it is always interesting observing animals – even animals in captivity. Even animals which really shouldn’t be in captivity – like dolphins.

I attended the dolphin show anyway.  I thoroughly enjoyed it. For a start, there were a number of young women in rubber wet suits presenting . . . No – sorry, a distraction. I must concentrate on the dolphins – who also, it seemed to me, thoroughly enjoyed the show.  They were certainly willing to perform their tricks – and consume their fish rewards. They leapt, spun, splashed and waggled their flippers at a rate of knots. An older male – his skin much marked with old scars I noticed – was happy to haul himself ashore to be petted while one of the young women gave an educational commentary about dolphins in the wild.

The commentary was broadcast from a series of large speaker cabinets hung horizontally from the canopy under which we – the audience – sat. The cabinets had bass ports – open apertures into the interior of the cabinets. I noticed that house sparrows were entering and leaving these ports. Entering was not easy. The sparrows had to fly vertically up a smooth and narrowing funnel whose diameter soon became significantly less than their wingspan. And yet they made it.  I realised, to my amazement, that they were actually nesting inside the cabinets.

Fortunately, the sound quality was not obviously affected.

A male black redstart (Phoenicurus ochruros) landed on the rim of the wall surrounding the dolphinarium. Sooty black with an orange-red rear end and tail. This was not a bird I recalled having seen before. It is present in the UK, but scarce. It therefore held my binoculared attention for some time. I also noticed that beyond the redstart there were vultures wheeling in the far distance – too distant to identify, but presumably Egyptian vultures (Neophron percnopterus).

I returned to the dolphins, who continued to perform their synchronised routines with apparent enthusiasm and unquestionable gusto.  They reminded me of dogs – so willing to be trained, to perform, to please. Except that dogs have been bred over millenia to be dependent on human approval. Dolphins – notwithstanding the fish – appear to enjoy the collaboration voluntarily. Even non-captive, wild dolphins, seem to enjoy the company of humans.  But perhaps they are a little like cats too and would prefer to enjoy the company of humans on their own terms.  Difficult when confined in a tank. I wondered what they did with themselves when they weren’t performing.

The Attica Zoo – like others – justifies its existence on the basis of public education and collaborative conservation and breeding programmes.  In the case of the dolphins they can really only appeal to the first.  So far at least – despite being accidently caught in fishing nets or deliberately caught for slaughter – or for dolphinariums[1] – and pollution and over-fishing reducing their food supplies –  dolphins are still managing well enough in the wild.  Bottle-nose dolphins such as these are officially classified as being of ‘Least Concern’ in conservation terms. The question is whether the negatives of keeping these intelligent, social individuals in captivity could possibly be outweighed by the benefit to their species as a whole.  The commentary was educational. The performance was irresistible. Those who saw the show will now support laws for the protection of dolphins – and other cetaceans (orcas, humpbacks, whales of all kinds) – in the wild. Perhaps it’s a reasonable hope.

The zoo also contains other intelligent and sociable residents – Siamang gibbons and chimpanzees for example. And other less naturally sociable animals which probably ought not to be forced to share a cage with others, even of their own kind – leopards, jaguars and tigers for example.  At least none of these were asked to put on a show.

They were often fascinating to watch though:

The pendulumnal brachiation of gibbons is wonderful to behold. In fact I have wanted to be a gibbon from an early age – just for the swing of it. A couple of the younger ones, being full of energy, showed how it was done – with ease and grace. The older ones, I noticed, though sat on the ground or on a platform perch, kept one arm vertical with their hand wrapped loosely around a convenient branch or rope above. Ready to go perhaps.

The jaguars – a pair – were engaged in mating. The male was clearly more enthusiastic than the female . . . She moved away. He complained vocally but did not pursue her. Clearly a gentleman.

Other residents were of interest too :

A couple of giraffes were fighting. Or at least, they were swinging their necks and landing blows with their heads on the other’s flanks or belly. But each swing was slow and ponderous, and each blow was lazy, giving the strong impression of a lack of proper seriousness to the affair. Sometimes they just did some rump-bumping instead.

The coati-mundi were in sleep mode : 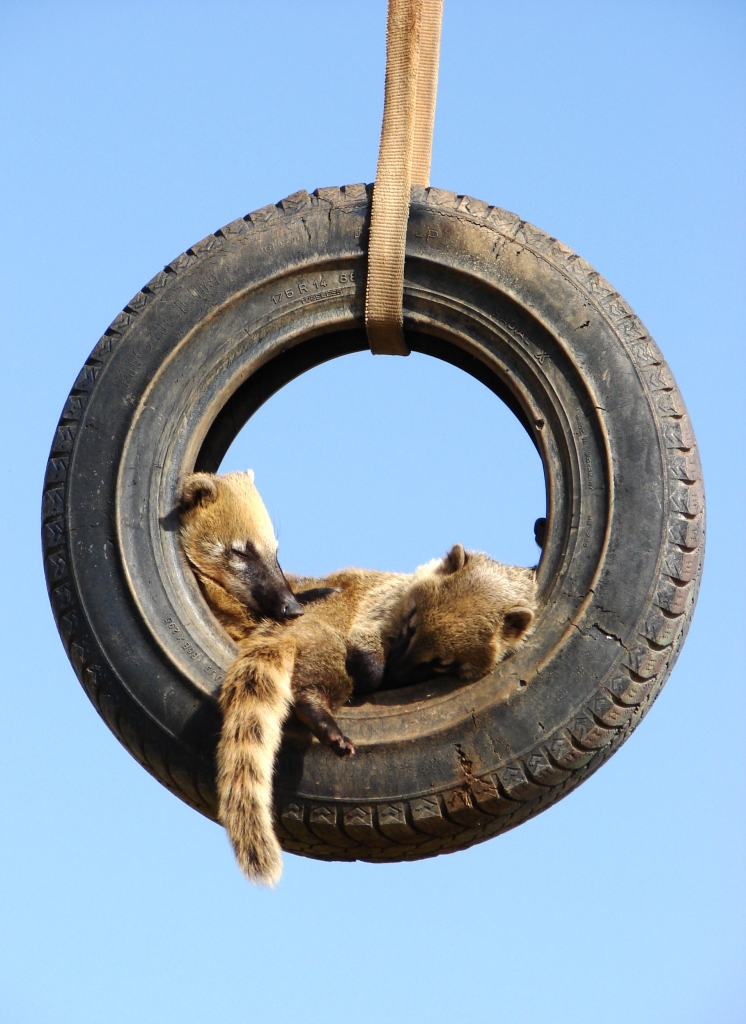 I was particularly interested in the Cretan goats, having previously visited the vicinity of the White Mountains. They are an orange-brown colour; the females are black crowned and blazed; the males also have a black band around their shoulders and down their back. They are otherwise known as kri kri, or Cretan Ibex, or Capra aegagrus cretica if you prefer. They are rare, shy and only to be found in remote and inaccessible parts of the mountains. They were hunted almost to extinction for food during World War II by partisans opposing the German occupation but have now recovered to a population of a couple of thousand. Technically, they are not actually wild. Scientific analysis shows that they are feral, descended from goats domesticated around ten thousand years ago. Long enough to be thoroughly wild again I would think.

I was not the only visitor to the zoo of course and I couldn’t help noticing how many of the others were families with young children – young children being given their first experience of the wonders of the animal kingdom – and all to grow up to become defenders of animals in the wild.

On the bus on the way to the zoo a young-ish woman was stood by the door. She was of a noticeably traditional appearance in both her dress and hairstyle. The bus passed a small church – at speed. She crossed herself four times at something approaching the speed of light as we zipped by and just about managed to finish before we were passed.